More than 40 pounds of marijuana worth about $120,000 was found in a BMW during a traffic stop on I-75 in Golden Gate on Tuesday, Collier County Sheriff’s officials said.

Ibrahim Makhoul, who is 24 and from Miami, was arrested and charged with marijuana trafficking in excess of 25 pounds. Police are still searching for a second passenger, who fled the scene.

Makhoul was driving in the area of the I-75 toll plaza when police noticed the black BMW he was in appeared to have illegally-tinted windows, authorities said. An officer conducted a traffic stop, and while police questioned the driver and passenger, a K-9 officer sniffed the outside of the vehicle.

The sniff exam revealed that there was probable cause to search the vehicle, officials said. When police were unable to open the center console or trunk, Makhoul told them that both were locked when he purchased the car and that he had never attempted to open them.

“It’s crazy,” Ibrahim told police. “I don’t know how they gave me the car like that, like with the middle thing shut and the back thing shut too.”

Eventually, officials opened the console and found an unsealed package with marijuana. Then, they identified a switch that they flipped to unlock the trunk, where police found two large black plastic bags with small, clear packagers of marijuana.

Though Makhoul told police he had never been in the truck, police found paperwork with his name inside.

During the search, the car’s passenger climbed over a nearby fence, swam across a canal and ran into nearby woods, police said.  Officials searched for the suspect but were unable to find him.

About 43.5 pounds of marijuana were confiscated from the car, officials say.

Makhoul was arrested and transported to the Naples Jail Center. 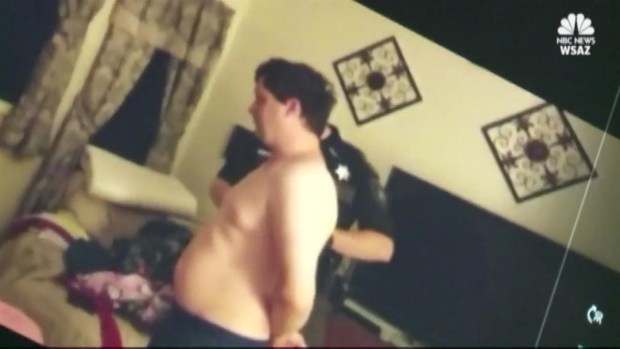