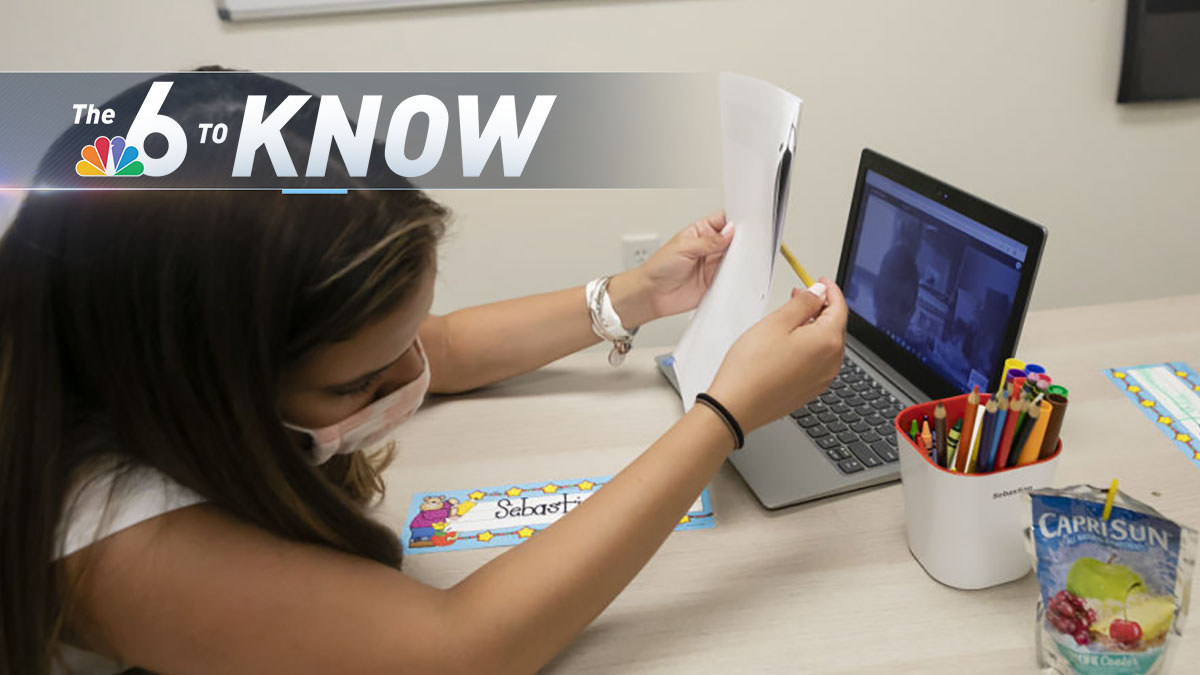 It’s Wednesday, August 4th – and NBC 6 has the top stories for the day.

No. 1 – The number of patients hospitalized with COVID-19 at Baptist Health are soaring – their patient count doubling in just one week.

On August 3, the hospital reported 736 patients are now hospitalized with COVID-19. Last week, the hospital recorded 493 patients. “If we compare that to 2 weeks ago, it’s probably 100% more,” said Dr. Zulma M. Berrios, Chief Medical Officer at Baptist Health. If you compare these numbers to last year, in the early months of the pandemic, the hospital reported peak of 831 patients in mid-July 2020. Doctors know the Delta variant is spreading rapidly and hospitals need the space to treat patients for non-COVID issues. “With the Delta variant, one person can transmit it to five, where the variant we had in the past, one person probably passed it to two or three,” said Dr. Berrios.

No. 2 – President Joe Biden on Tuesday called on resistant Republican governors to “get out of the way” of vaccine rules aimed at containing the more transmissible and dangerous COVID-19 variant. He backed city and private mandates requiring people to be vaccinated to go about some daily activities.

Speaking from the White House, Biden sharply criticized Florida Gov. Ron DeSantis, Texas Gov. Greg Abbott and other officials who have moved to block the reimposition of mask mandates to slow the delta strain of the virus. The strain is surging in their states and other parts of the country that have large numbers of unvaccinated people. Florida hit 11,515 hospitalized patients Tuesday, breaking last year’s record for the third straight day and up from just 1,000 in mid-June. DeSantis said he expects hospitalizations to drop in the next couple weeks, asserting that the spike is seasonal as Floridians spend more time together indoors to escape the summer heat and humidity.

No. 3 – The question of whether Florida public school students will be required to wear masks seems to have been settled by Gov. Ron DeSantis. Last week, he signed an executive order prohibiting school districts from mandating masks, a move cheered by many parents.

Now the backlash has begun, from educators, doctors, and other parents, especially those whose kids have conditions that make them more susceptible to the coronavirus. The Broward County school board had voted unanimously last Wednesday to require all students and teachers to mask up on campus this school year, but the governor’s action threatens to pull state funding if his order is ignored. So what’s next? Click here for the story from NBC 6 reporter Ari Odzer.

No. 4 – People can be heard screaming and yelling for help amid rubble in newly released police body camera footage that shows the initial emergency response to the Surfside condominium collapse.

The footage released Tuesday by the Town of Surfside shows the massive response to the Champlain Towers South on Collins Avenue, moments after a section of the building collapsed in the early morning hours of June 24. Another officer is seen running alongside the portion of the building that’s still standing in darkness, as screaming can be heard in the background. In another video an officer running to the scene finds people yelling “please help!” near the building’s garage area, with cars having fallen into partially collapsed sections of the concrete. Click here to see the video that contains images that could be disturbing for some viewers.

No. 5 – The last year has been rough on Ivan Varela, who lost his job as a cook in March 2020 when restaurants were shut down. He got by on rental assistance, but by March 2021, the money dried up and he got evicted from his apartment in Sunrise.

It’s a stressful situation he and many others have had to face during the pandemic. The CDC is trying to save others from going through similar evictions. On Tuesday, the CDC announced it is putting a hold on evictions through October. The ban covers U.S. counties where there’s a high spread of COVID-19. The move comes just days after the federal moratorium expired over the weekend. Click here for the emotional reaction from those most in need in a story from NBC 6 reporter Kim Wynne.

It didn’t take long to see some action. Tyler Austin walked with one out in the bottom of the first and Broward native and Boston Red Sox prospect Triston Casas capitalized on the opportunity, hitting a two-run jack off Denyi Reyes.  Thirteen-year MLB veteran Scott Kazmir got the start for the Americans and pitched a gem. He held the Dominican Republic to just two hits over five shutout innings. The United States will play the loser of the South Korea/Japan game on Aug. 5 at 6 a.m.