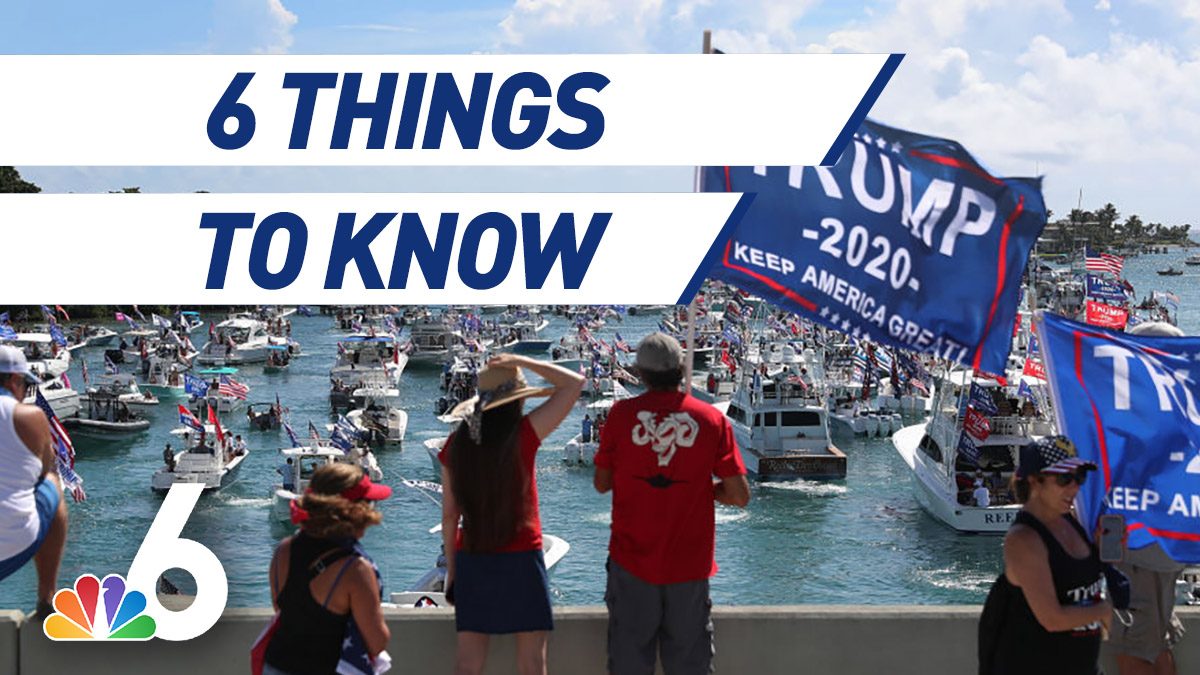 It’s Tuesday, September 8th – and NBC 6 has the
top stories for the day.

No. 1 – A North Miami Beach man is behind bars after police say he claimed to have killed his mother because “he lost it.”

According to a police
report, 29-year-old Luis Pages admitted to shooting and killing his mother,
Miriam Gonzales, to officers after a heated argument Sunday evening. Pages said
the confrontation began when he asked his mother for her car in order to search
for jobs on Monday. Police say Pages then pulled out a gun and shot his mother
multiple times before he threw the gun on the ground and hysterically called
911. To hear what family members and neighbors had to say Only on 6, click
here for a report from NBC 6’s Amanda Plasencia.

No. 2 – President Donald Trump is expected to make a South Florida stop on Tuesday, his first trip to Palm Beach County since the coronavirus pandemic began in mid-March.

Trump will arrive in
Jupiter for an afternoon event before he is scheduled to attend a rally later
in the evening in North Carolina. The President will discuss the Great American
Outdoors Act, which provides funding to national parks, forests, wildlife
refuges and recreation areas. Trump is seeking re-election and looks to win
Florida for a second straight time as he competes against Democratic candidate
and former Vice President Joe Biden.

No. 3 – A hand sanitizer distributed by a Coral Gables company has been added to the U.S. Food and Drug Administration’s do-not-use list.

490
milliliter bottles of AAA Advanced hand sanitizer with an expiration date of
April 20, 2022 have been recalled by AGR Trading. Methanol was reportedly found
inside the sanitizer. The bottles can be returned to the store for a full
refund.

No. 4 – The Miami Heat look to clinch the series over the Milwaukee Bucks in game five of the Eastern Conference second round.

The
Bucks won the last matchup 118-115. Khris Middleton scored 36 points to lead
Milwaukee to the victory and Bam Adebayo recorded 26 points in the loss for
Miami. The Bucks have gone 37-7 against Eastern Conference teams. The Heat are
30-13 in Eastern Conference play. Miami is second in the Eastern Conference
with 25.9 assists per game. Milwaukee star Giannis Antetokounmpo is listed as day-to-day
with an ankle injury. Tip off is at 6:30 p.m.

No.
5 – A new coffee concept has rolled into the scene in South Florida.

Nine months ago, over some cafecito, an idea was born. Two friends took a look at a cafetera and decided, why not make a giant one? “La Cafetera” is about 13 feet tall by 7 feet wide, and mounted on a trailer ready to go to any event or location. To kick off the holiday weekend, administrators at Our Lady of Lourdes academy hired the cafe-on-wheels as a sweet surprise for teachers. To hear how the idea became a reality, click here for a report from NBC 6’s Laura Rodriguez.

No. 6 – Weatherwise, rain chances increase Tuesday across parts of South Florida and look to stay higher for much of the work week while an active tropics do not appear to threaten the area at this time. Keep your NBC 6 app handy for push alerts on any severe weather as well as First Alert Doppler 6000.