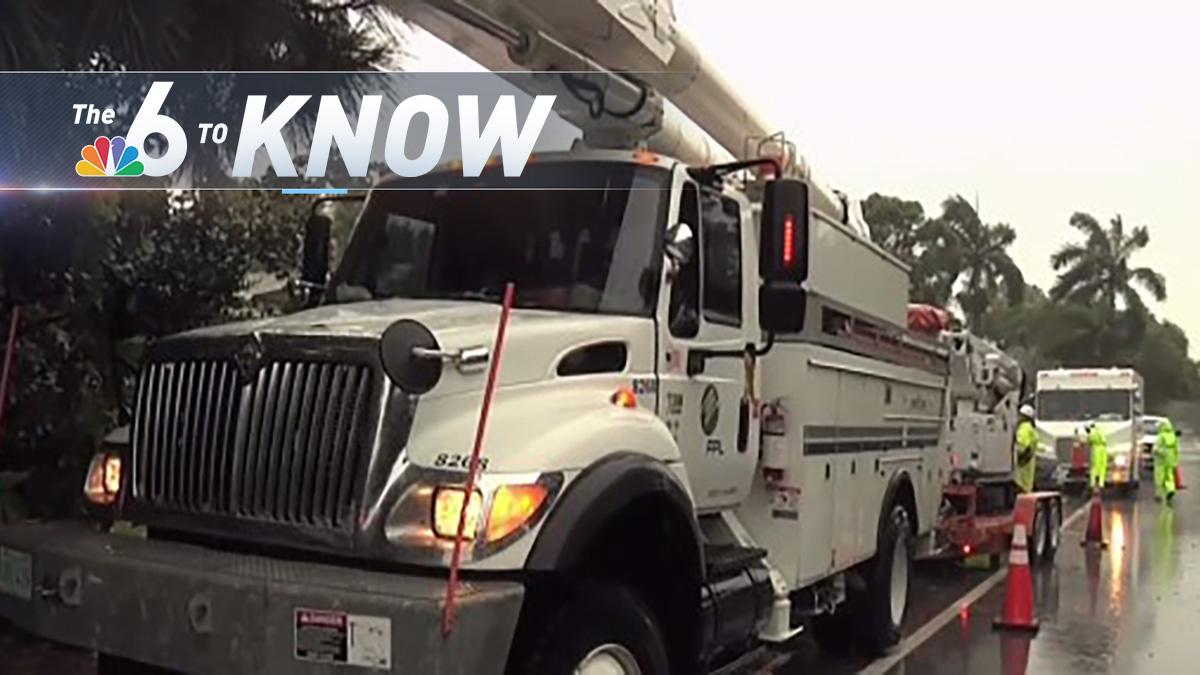 It’s Tuesday, September 27th – and NBC 6 has the top stories for the day.

No. 1 – Evacuations were underway along Florida’s Gulf Coast as Hurricane Ian churned toward the state and was expected to become a dangerous Category 4 hurricane after making landfall Tuesday morning in western Cuba.

The Category 3 storm made landfall around 4:30 a.m. southwest of the town of La Coloma in the Pinar Del Rio province of Cuba. Ian is forecast to reach its peak intensity as a Category 4 hurricane over the warm Gulf of Mexico waters, with top winds of 140 mph when it makes landfall in Florida on Wednesday. The hurricane center said Ian will slow down over the Gulf of Mexico, growing wider and stronger, “which will have the potential to produce significant wind and storm surge impacts along the west coast of Florida.” A surge of up to 10 feet of ocean water and 10 inches of rain was predicted across the Tampa Bay area, enough water to inundate coastal communities.

No. 2 – All schools and offices in the Monroe County School District will be closed Tuesday due to the impacts of Hurricane Ian.

Potential impacts to the area include storm surge, damaging winds, flooding rainfall, and the threat of isolated tornadoes in rain bands. Officials haven’t decided whether schools will reopen on Wednesday and advised the public to stay updated. Other county programs and services that will be closed ahead of Ian include waste management. More information can be found at monroecountyem.com/JIC.

No. 3 – Florida Power & Light was preparing more than 13,000 workers to assist with their response to Hurricane Ian, company officials said Monday.

The power company said they were pre-positioning workers and supplies to respond to any outages from the hurricane, which was forecast to possibly make landfall along Florida’s west coast later this week. In addition to damaging winds, Ian has the potential to bring heavy rains, storm surge and flooding that may slow access for crews restoring power after the storm, the company said. FPL is also preparing for widespread outages stretching over multiple days due to the slow-moving storm, company officials said.

No. 4 – Prosecutors in the penalty trial of Parkland school shooter Nikolas Cruz will begin their rebuttal case Tuesday, challenging his attorneys’ contention that he murdered 17 people because his birth mother abused alcohol during pregnancy, a condition they say went untreated.

Prosecutor Mike Satz’s team is expected to call experts who will testify Cruz has antisocial personality disorder — in lay terms, he’s a sociopath — and fully responsible for his Feb. 14, 2018, attack at Parkland’s Marjory Stoneman Douglas High School. Cruz, who turned 24 on Saturday, pleaded guilty last October to murdering 14 Stoneman Douglas students and three staff members. The seven-man, five-woman jury will decide whether he is sentenced to death or life without parole, weighing aggravating factors presented by prosecutors against the defense’s mitigating circumstances. A juror could also vote for life out of mercy for Cruz. For the former Stoneman Douglas student to receive a death sentence, the jury must unanimously agree.

No. 5 – When every second counts and lives are on the line at Miami International Airport, there’s no room for error.

Miami-Dade Fire Rescue recently provided NBC 6 with exclusive access to show how they get ready for moments such as this one scene in June, when a Red Air flight from the islands had its landing gear collapse and it struck an antenna when going off the runway. Smoke was billowing from the plane. Passengers were jumping on the emergency evacuation chutes. The fire teams with their specialized equipment arrived within 90 seconds. The fire teams have technology that can make a difference — a piercing tool that allows the firefighters to break through into the aircraft and fight any fire. Also, infrared camera technology allows them to see exactly where any fire is burning. Click here for more in a report from NBC 6 investigator Willard Shepard you’ll see Only on 6.

No. 6 – September is preeclampsia awareness month and Memorial Healthcare System is sounding the alarm that they are seeing more than double the national 30-year average of pregnant and postpartum women experiencing high blood pressure in South Florida.

Hortense Martin, a nurse manager at Memorial Hospital Miramar Labor and Delivery says preeclampsia is a hypertensive disorder that affects women in pregnancy that can be life-threatening to the mother and baby. It can lead to severe disabilities or even mortality and maternal morbidity. A recent generational study published in JAMA Network Open of 38 million pregnancies in the U.S. found that new-onset hypertensive disorders of pregnancy had more than doubled for those born in the 1990s and 2000s compared with women born in the 1950s. Click here for more in a report from NBC 6’s Amanda Plasencia.