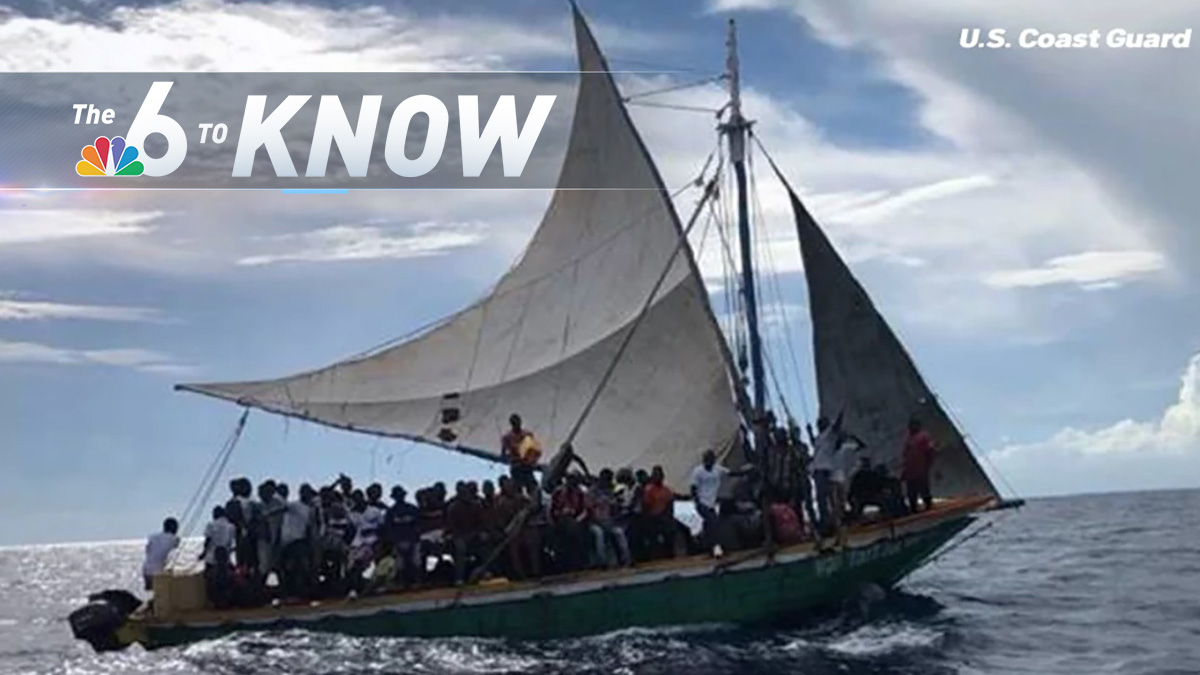 It’s Monday, August 8th – and NBC 6 has the top stories for the day.

No. 1 – Police have arrested a Hialeah man after his 3-year-old son shot himself in the face.

Orlando Guzman Labrada was charged with culpable negligence/firearm with easy access, according to an arrest report from Hialeah Police. According to the police report, Labrada while using the bathroom, left his loaded firearm unattended on the counter. His 3-year-old son, walked into the bathroom using the unlocked door, grabbed the loaded firearm, and discharged a round.    The bullet grazed the child’s face. He was transported to Ryder Trauma Hospital for a complete check and treatment as a precaution, the report said.

No. 2 – There have been at least 16 migrant encounters statewide within a two-day period that have led to the arrest of 263 migrants, the Border Patrol announced Sunday.

The most recent was on Saturday when about 300 migrants were rescued near Key Largo after trying to make it to the United States. 113 of the migrants jumped off the boat and swam to shore where border patrol said they took them into custody. The 218 of the remaining migrants who stayed onboard the vessel were taken into custody by the United States Coast Guard. Officials say none were seriously hurt. On Friday another boat near the Lower Keys overturned, the coast guard said eight people were rescued, five still haven’t been found.

No. 3 – Voters looking to cast their ballots in person will get a chance to do so Monday as early voting begins in one South Florida county.

Miami-Dade will begin allowing early voting from 7 a.m. to 7 p.m. through Sunday, August 21st. Voters had until July 25th to update their voter registration and sign up to be able to vote in the August 23rd primary election. Nearly 400,000 mail-in ballots were mailed out to voters who requested one. The deadline to return mail ballots in Miami-Dade is 7 p.m. on Election Day for them to be counted. For more information about the August 23rd primary and where you can vote early, click here.

The estimated $740 billion package heads next to the House, where lawmakers are poised to deliver on Biden’s priorities, a stunning turnaround of what had seemed a lost and doomed effort that suddenly roared back to political life. Democrats held united, 51-50, with Vice President Kamala Harris casting the tie-breaking vote. Senators engaged in a round-the-clock marathon of voting that began Saturday and stretched late into Sunday afternoon. Democrats swatted down some three dozen Republican amendments designed to torpedo the legislation. Confronting unanimous GOP opposition, Democratic unity in the 50-50 chamber held, keeping the party on track for a morale-boosting victory three months from elections when congressional control is at stake.

No. 5 – Protestors held a rally Saturday morning, voicing concerns about the city of Miami’s plan to move its homeless population to a camp at Virginia Key Beach North Point Park.

Esther Alonso owns a business there.  “We’re gonna be kicked out of here,” said Alonso, owner of Virginia Key Outdoor Center. “I’m gonna lose my business, and I’m most worried about my employees because they don’t deserve this.” The location is at the back of the park between the bike trails and Virginia Key Outdoor Center, which rents kayaks and paddle boards. In July, Miami city commissioners voted in favor of a plan to build anywhere from 50 to 100 mini homes at the park.  The area is currently an open field in the park. The location of the camp is ironically located right across the water from the most exclusive place to live, Fisher Island.

No. 6 – Former NFL star Terrell Owens is calling for a woman’s arrest, claiming she made a false and racist report against him to police in their gated Deerfield Beach community, and the heated confrontation was all caught on cellphone video.

The verbal dispute happened at around 10:30 p.m. Wednesday, according to the Broward Sheriff’s Office. “I’m driving to my mailbox. She’s telling me I’m speeding, telling me to slow down,” Owens said in a video he filmed. The woman called 911, accusing Owens of speeding through the neighborhood, nearly hitting her, and then threatening her. When deputies showed up, Owens started recording. NBC 6 reached out to both the neighbor in question and Owens for comment. Neither have responded.