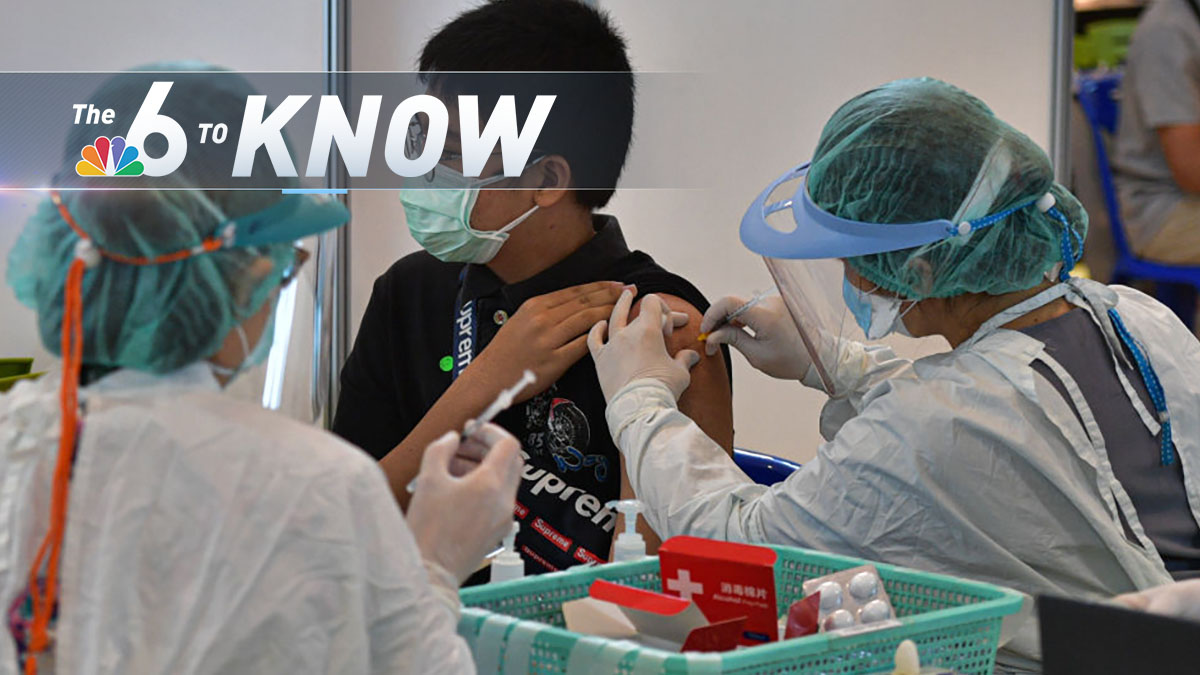 It’s Wednesday, September 22nd – and NBC 6 has the top stories for the day.

No. 1 – A coroner in Wyoming confirmed on Tuesday that the body found in the park over the weekend is Gabby Petito, and has ruled that her death was a homicide.

The cause of death is still pending the final autopsy results, the FBI said in a tweet. In a press release, the FBI said that the forensic search at the Spread Creek Dispersed Camping Area ended on Tuesday. However, they are still looking for anyone who may have had contact with Petito or her fiance, Brian Laundrie, or seen their vehicle between Aug. 27-30. While it occurred more than two weeks before she went missing, a witness report provided new details of a fight between Petito and Laundrie on Aug. 12. Police in Laundrie’s Florida hometown, launched a renewed search for him in the 25,000-acre Carlton Preserve on Tuesday, a day after they said they were suspending the effort because they believed they had exhausted all avenues.

No. 2 – Two parents are facing battery charges after they were caught on cellphone video getting into a fight with a grandmother and her grandson Tuesday near a school in Doral.

The fight happened in a neighborhood outside of Dr. Rolando Espinosa K-8 Center. Natalie Laboy, 33, faces a charge of aggravated battery on a person 65 years or older, and Michael Laboy, 35, faces charges of aggravated battery and misdemeanor battery. Cellphone video shows a student wearing a jersey, throwing punch after punch while another student victim is already on the ground. The student continues to kick the victim, who is screaming, “get off me.” An adult is also heard screaming to punch him, and another is heard saying to get off her son.

No. 3 – Republican Florida Gov. Ron DeSantis named a UCLA doctor and health policy researcher who shares his approach to managing the coronavirus pandemic to serve as the state’s surgeon general Tuesday.

Like DeSantis, Dr. Jospeh Ladapo said he doesn’t believe in school closures, lockdowns or vaccine mandates. He said approaching health policy with fear leads to bad decisions. Lapado, who received his medical degree and a Ph.D. in health policy from Harvard University, will replace Dr. Scott Rivkees, whose contract expires at the end of the month. Lapado said vaccines aren’t the only way to combat COVID-19 and getting one is a personal choice.

No. 4 – Ample evidence shows that the COVID-19 vaccines dramatically reduce the risk of serious illness, but stories about breakthrough infections continue to spark fear among people who are vaccinated — and resistance among those who aren’t.

President Joe Biden tried to put those fears in perspective by citing a noteworthy statistic in a Sept. 9 speech. “Recent data indicates there’s only one confirmed positive case per 5,000 fully vaccinated Americans per day,” he said.  Throughout the pandemic, experts have stressed the difficulty of determining the exact number of vaccinated people who contract COVID-19. Politifact wanted to understand where the figure came from, how it was calculated, and what it can tell us about the prevalence of breakthroughs. Click here for the findings in a report from NBC 6 investigator Phil Prazan.

No. 5 – Miami’s police union is getting ready to vote on whether they have confidence in Chief Art Acevedo as a citizens panel began its probe into the complaints filed over damage on the chief’s department vehicle.

Prompting the current flare-up between the rank and file union officers and Acevedo are photos taken by union president Tommy Reyes showing the damage to the front bumper of the police chief’s black SUV. The complaint filed anonymously with the Citizens Investigative Panel alleges Acevedo broke the department’s rules. The chief, through a spokesperson, said he’s done nothing wrong and followed the rules. He says all this is an attempt to hinder his efforts to improve the department. Click here for more in a report from NBC 6 investigator Willard Shepard.

No. 6 – Many people struggling to pay their rent are turning to rental assistance programs for help, but some are running into roadblocks getting the funding.

Billions in federal rental assistance has been made available for Floridians behind on their rent.  NBC 6 Responds has heard from renters who are facing issues getting the money. Local governments have been awarded two rounds of Federal Rental Assistance money. The first round of funding, known as ERA 1, does not require landlords to participate in the rental assistance program and requires multiple attempts to obtain the cooperation of the landlord. Many local programs are still administering the first round of funding. Click here to find out why the problems are arising in a report from NBC 6 consumer investigator Sasha Jones.