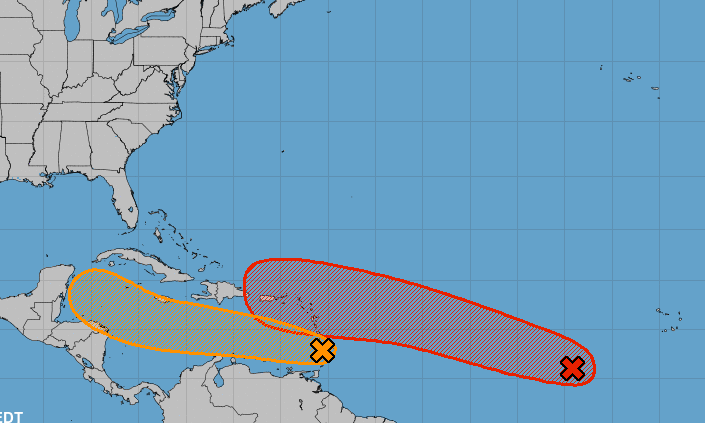 There’s no slowing down the Atlantic hurricane season as two more areas are under surveillance in the tropics.

Both features are showing potential to mature into tropical depressions this week.

One area is a tropical wave, moving rapidly west in the vicinity of the Windward Islands as of Monday night and Tuesday morning.

As it enters the Caribbean and begins the slow down, environmental conditions may favor development mid to late week when a depression may form. For now, this area has a 60% chance for development over the next five days.

Moving into the eastern tropical Atlantic, a broad area of low pressure, some 1,700 miles east of the Lesser Antilles, is the other area to watch.

This particular area appears poised to organize and may do so in a day or two.  The National Hurricane Center has given this area a 90% chance for development over the next five days, with the likelihood of organization occurring sooner.

While little can be said for any potential impacts at this time, both areas are worthy of attention as we move into a more active period of the hurricane season.

The next two names on the 2020 hurricane season list are “Laura” and “Marco.”