A South Florida mother says her daughter is being bullied and is frustrated with the way school officials are handling the situation.

Cellphone video from February 7 shows a female student at Coconut Creek High School yelling at another to stand up.

Freshman India Carr is the girl sitting down. She says she didn’t want to fight.

“At first when she came up to me, my heart was beating and I was shaking, but I wasn’t trying to show it,” Carr told NBC 6 from her home Monday. 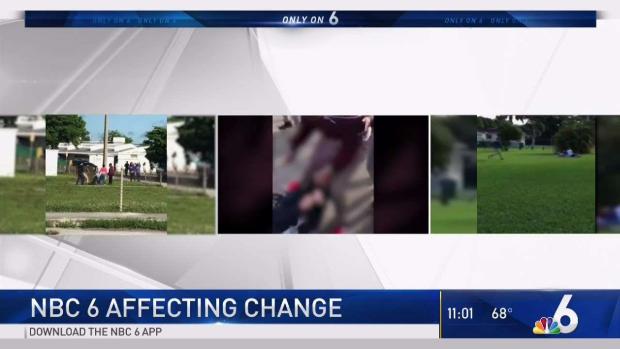 In the video, other students join in, appearing to escalate the situation. Carr stood up and then got pushed. A fight broke out, and Carr admits she hit the other girl, but only after being bullied and pushed.

Several other students are seen trying to pull them apart.

“I felt like at that point I had to defend myself,” Carr said. “I wasn’t going to let her keep pushing me around.”

“I couldn’t even watch it, it broke my heart to see my daughter defenseless and to see the teacher in the background,” says Shantania Feggett, Carr’s mother.

Carr says she and two other girls involved were suspended.

The Broward County School District said in a statement to NBC 6 that the teacher notified security and the students involved were disciplined accordingly.

“Per the principal, The substitute teacher in the classroom immediately notified school security to respond to the incident,” the statement read. “Based on the school’s investigation, all students involved received disciplinary consequences as outlined in the Code Book for Student Conduct discipline matrix. School leadership has been in communication with the families involved, as safety and security are always our highest priorities.”

But Carr’s mom doesn’t feel her daughter is being treated fairly, she worried it could happen again.

Both Carr and the other student are back in their class together. Carr says she feels uncomfortable, but she’s trying to focus on school work.