After three construction cranes collapsed in South Florida during Hurricane Irma, officials are again calling for tighter regulation of the equipment, setting up a potential fight with an industry that has fought stricter controls.

Miami City Commissioner Ken Russell tweeted from one of the two accidents on high-rises in downtown Miami that the crane had dropped a counterweight that penetrated the asphalt when it failed.

“It’s development in the future versus tropical storms or hurricanes,” Regalado told The Miami Herald. “We just cannot gamble on the wind.”

Twenty to 25 cranes are in use at construction sites in Miami as it undergoes a building boom, and on Sunday, as Irma roared through the city, cranes fell on Biscayne Boulevard and on NE 30th Terrace. The third crane collapsed onto itself in Fort Lauderdale at the Auberge Beach Residences and Spa, an oceanfront condo complex also under construction. 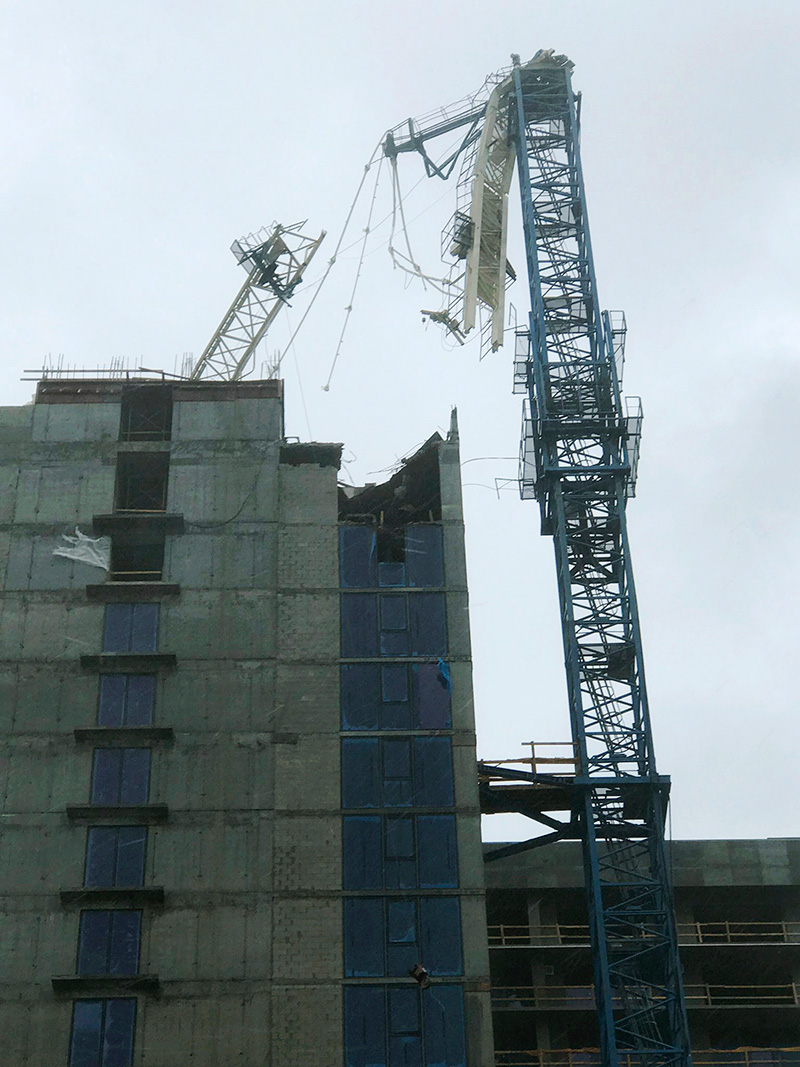 The county had argued that its standards were aimed at protecting the safety of the public during hurricanes, not workers’ safety as governed by the federal Occupational Safety and Health Administration. Falling cranes kill workers and non-workers alike, it said.

The U.S. Court of Appeals for the 11th Circuit sided with the builders and crane operators who sued — the Associated Builders and Contractors, Florida East Coast Chapter; the South Florida Associated General Contractors of America; the Florida Crane Owners Council and the Construction Association of South Florida.

The court ruled that the county’s arguments were not persuasive. Construction job sites are closed to the public, the judges wrote. The wind standards in the county’s law were occupational safety or health regulations, covered by federal rules.

“Furthermore, the county failed to identify a single incident in which a crane accident injured a member of the general public during a hurricane,” they wrote.

Eddie Gonzalez, an assistant county attorney who helped on the case, told The Miami Herald the legislation was intended as a safety measure during storms.

“It was to secure the cranes,” he said. “We fought it in court. Unfortunately, we didn’t win.”

Neither Regalado nor Gonzalez could be reached for comment on Monday.

Russell tweeted that he climbed 50 floors to assess the cause of the crane failure with officials from the crane distributor, the construction company and the city of Miami building department.

“The tie backs functioned. tower was in place. Something happened up at the swivel plate causing counterweights to drop,” he wrote.

Asked if the industry would be more amenable to new regulations given the three crane collapses, the chairman of the Florida Crane Owners Council, Jim Bryson, said it would depend on what was proposed.

“If you mandate too much, we won’t even be able to build the buildings,” Bryson of Bryson Crane Rental Service said. “There might be some happy medium. I don’t know how that would work.”

The cranes could have been subjected to such strong gusts of winds that it would be prohibitive to design to protect against them, he said. But regulations in the crane industry do change as OSHA pinpoints problems and manufacturers make improvements, he said.

“It’s safer than it ever has been with the OSHA regulations,” he said.

No one was injured Sunday when the three cranes collapsed but the city Miami warned of the great danger they posed.

“AVOID THE AREA,” the city tweeted after one crane collapsed on top of a high rise under construction on Biscayne Boulevard. Nearby residents should shelter on the sides of their building facing away from the crane or in a stairwell, it wrote.

Five days earlier, the deputy director of the Building Department, Maurice Pons advised against staying in a building next to a crane during the hurricane. The cranes are designed to withstand winds of up to 145 miles an hour, not a Category 5 hurricane, which Irma was at the time, the city wrote. The crane’s arm is not tied down but must remain loose and the arm’s counterbalance is very heavy and a potential danger.

Asked why the cranes were not being removed, the city responded that there was not enough time. It can take two weeks to dismantle them, it wrote.

But Thomas Barth, the owner of Barth Crane Inspections in South Carolina who investigates accidents, said that the arms and counterbalances could have been removed in only two days a crane. If needed, crews could have been brought in from other states to handle all of the construction sites, he said.

The cranes are under enormous stress as they spin, or weathervane, in gusts of wind, he said. The towers alone are stronger and can remain standing.

Bryson agreed that removing the arms, or jibs, and the counterbalances would be a possibility.

“And every measure was taken to safeguard human life including mandatory evacuation,” it said in its statement. “The crane engineers and crane supplier took measures to secure the crane which had its boom damaged due to high winds. It would have taken several days to dismantle the crane and time was not afforded. Plaza is cooperating with all governing agencies, crane engineers and supplier to investigate and establish repair requirements to put the crane back in a state of good repair. Crews are presently working at the building to access the damage and establish the repair schedule. The area around the building has been sealed off to ensure public safety.”