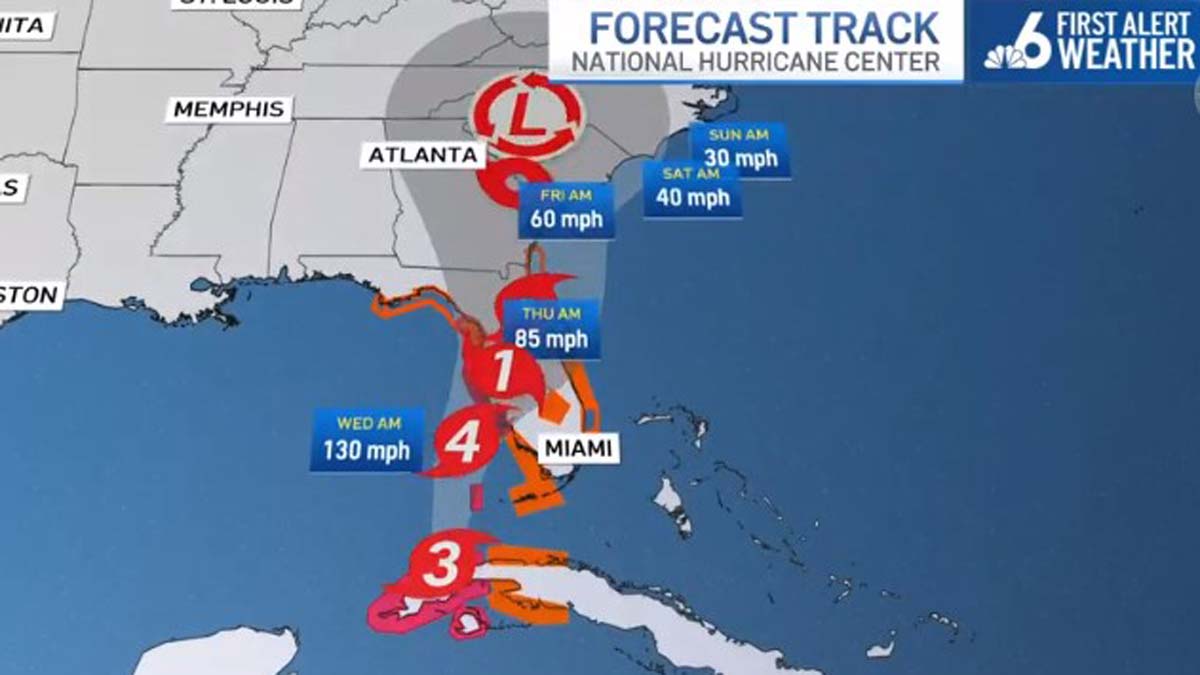 Florida’s Gulf Coast was bracing for Hurricane Ian as it churned toward the state and was expected to become a dangerous Category 4 hurricane after making landfall Tuesday morning in western Cuba.

Ian’s maximum sustained winds were at 115 mph as it moved north at 10 mph about 305 miles south-southwest of Sarasota, the National Hurricane Center in Miami said Tuesday morning.

The Category 3 storm made landfall around 4:30 a.m. southwest of the town of La Coloma in the Pinar Del Rio province of Cuba and later emerged into the southeastern Gulf of Mexico.

Ian was forecast to reach its peak intensity as a Category 4 hurricane over the warm Gulf of Mexico waters, with top winds of 140 mph before it makes landfall in Florida on Wednesday.

The hurricane center said Ian will slow down over the Gulf of Mexico, growing wider and stronger, “which will have the potential to produce significant wind and storm surge impacts along the west coast of Florida.”

Hurricane Ian on Path Toward Parts of Cuba, Florida: Watch the Track Live

“The impacts are going to be far, far broader than just where the eye of the storm happens to make landfall,” Florida Gov. Ron DeSantis said at a news conference Tuesday morning. “In some areas there will be catastrophic flooding and life threatening storm surge. If you’re on Florida’s Gulf Coast from Naples all the way through the Tampa Bay area and some of the counties north of that, that could be something that happens.”

A surge of up to 10 feet of ocean water and 10 inches of rain was predicted across the Tampa Bay area, enough water to inundate coastal communities.

A tropical storm warning was in effect for the lower and middle Florida Keys, Boca Raton to Altamaha Sound, Lake Okeechobee, Flamingo to Bonita Beach and Suwannee River to the Anclote River.

A tropical storm watch was in effect for portions of Miami-Dade County including Homestead, Kendale Lakes, Country Walk, Redland and Everglades National Park, Deerfield Beach to the Jupiter Inlet, Lake Okeechobee and north of the Suwannee River to Indian Pass.

A storm surge warning was in effect for Tampa Bay and the Anclote River southward to Flamingo. A storm surge watch was also issued for the Florida Keys from the Card Sound Bridge westward to Key West, including the Dry Tortugas, Florida Bay, the Aucilla River to Anclote River, Altamaha Sound to the Flagler/Volusia County Line, and the Saint Johns River.

NBC 6 has team coverage as the now Category 3 storm moves closer to the state.

Fort Myers is in the hurricane zone, and Tampa and St. Petersburg could get their first direct hit by a major hurricane since 1921.

“People on the barrier islands who decide not to go, they do so at their own peril,” Roger Desjarlais, Lee County’s county manager, said early Tuesday. “The best thing they can do is leave.”

As many as 300,000 people may be evacuated from low-lying areas in Hillsborough County alone, county administrator Bonnie Wise said. Some of those evacuations began Monday afternoon in the most vulnerable areas, with schools and other locations opening as shelters.

“We must do everything we can to protect our residents. Time is of the essence,” Wise said.

“With the kind of tidal surge we’re talking about, it would not be uncommon for both islands to be overwashed, and it’s a dangerous place to be,” Desjarlais said. We cannot by law force people off the islands, but we strongly recommend that they go.”

Tampa International Airport announced it would suspend all operations beginning at 5 p.m. ET Tuesday due the hurricane. Travelers are advised to contact their airline for information. American Airlines, meanwhile, reduced fares for flights out of 20 airports in the region that may be impacted by the storm. The airline is also waving fees for checked baggage and carry-on pets to help those in the area to evacuate.

School was suspended there on Monday and authorities began evacuating residents as Ian gained strength on approach to Grand Cayman and the Cuban provinces of Isla de Juventud, Pinar del Rio and Artemisa. Cuba also shut down its train system ahead of the worst weather.

On the forecast track, Ian will move over western Cuba early Tuesday and emerge over the southeastern Gulf of Mexico. Ian is then expected to move on a path to the Gulf Coast of Florida, with the center staying to the west of the Florida Keys, according to the latest advisory.

All schools and offices in the Monroe County School District will be closed Tuesday due to the impacts of Hurricane Ian. Monroe County Emergency Management was working to advise residents on specific details about the impacts from Ian.

The threat of torrential rainfall over the next few days from Hurricane Ian had Miami residents on guard, knowing that even a typical thunderstorm can cause flooding.

The problem is expected to be compounded by a king tide this week.

On Monday, Miami Mayor Francis Suarez reassured residents that all permanent water pumps are working, and seven additional portable pumps will be installed, as needed.

“We have created some additional pumping capacity in that area,” said Suarez. “We have to understand that that is in the midst of king tide where we have the highest tides of the year.”

NBC 6’s Yvette Lewis has more on how the southern parts of Florida are getting ready.

DeSantis activated the state’s National Guard on Sunday ahead of the storm’s expected impact later in the week.

The governor’s declaration frees up emergency protective funding to address potential damage from storm surge, flooding, dangerous winds and other weather conditions throughout the state.

DeSantis expanded the declaration of a state of emergency Saturday to include the entire state.

“It’s important to point out to folks that the path of this is still uncertain. The impacts will be broad throughout the state of Florida,” DeSantis said at a news conference Sunday. “So from the Tampa Bay area all the way up to Escambia County along Florida’s Gulf Coast you could potentially see it make landfall in any of those places as of right now.”

The Tampa Bay Buccaneers announced Monday night that the football team was relocating football operations to the Miami area in preparation for next weekend’s game against the Kansas City Chiefs. The Buccaneers said the team will leave Tampa on Tuesday.

Biden approved an emergency declaration for the state of Florida Saturday due to Ian, the White House said in a statement.

Hurricane Ian’s looming arrival also prompted NASA to move its moon rocket off the launch pad and into its Kennedy Space Center hangar, adding weeks of delay to the lunar-orbiting test flight.