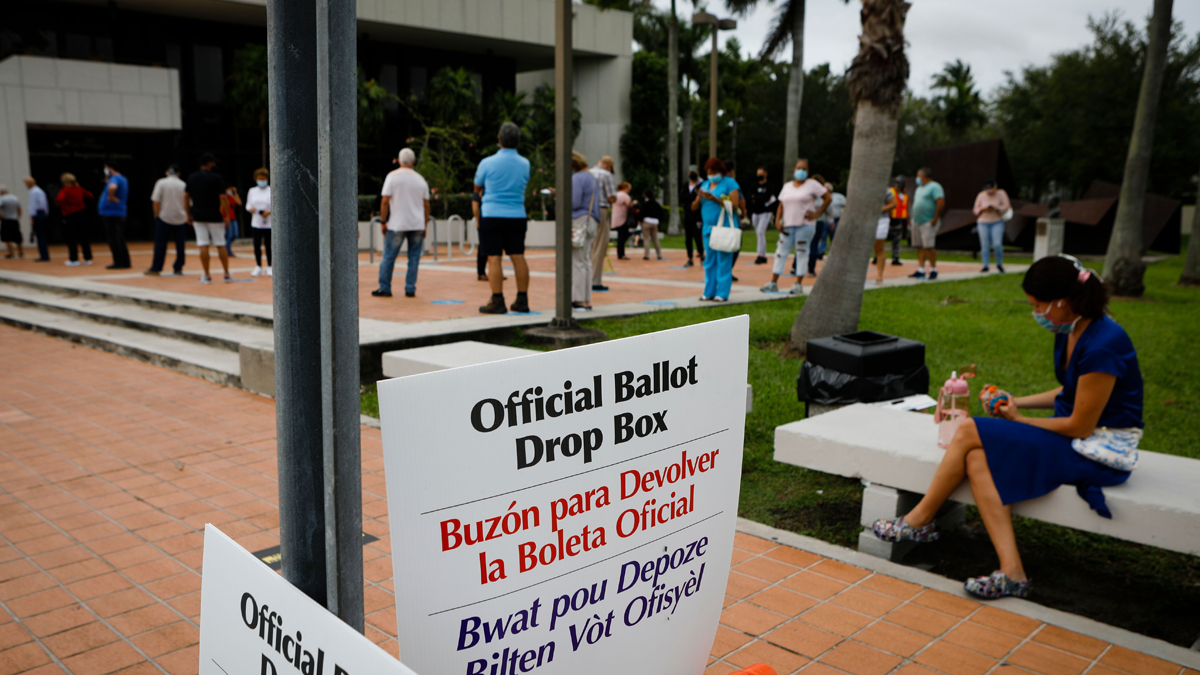 Floridians cast a record number of ballots on the first day of early voting with a partisan split that emphasizes the razor-thin margin that has historically decided the state for U.S. presidents.

State figures released Tuesday show that Democrats, Republicans and unaffiliated residents cast a total of 366,000 ballots Monday at early voting sites, about 18% more than were cast on the first day of early voting in 2016. Democrats cast 261 more votes than Republicans.

A review of all 3 million early votes, including those mailed in, shows that 500,000 more Democrats have cast ballots in Florida so far than Republicans — 1.44 million compared to 966,000. It is unknown whom these votes were cast for, however — and unaffiliated voters make up the remaining 20%.

Florida is the nation’s largest swing state — and one President Donald Trump must win to have a reasonable chance at reelection. He moved his official residence last year from New York City to Mar-a-Lago, his Palm Beach estate. Recent polls show Democratic nominee Joe Biden with a slim lead in Florida that is within the margin of error. Statewide elections in Florida are traditionally close, often within 2 percentage points or less.

Florida Republicans historically have done better at getting voters to the polls on Election Day than Democrats, so it is still too early to say how much significance the current margin has, political analysts say.

It’s unclear whether Democrats are bringing in new voters or simply getting reliable voters to cast ballots early. In any case, every vote cast early by a party member is banked — there is no risk the person will procrastinate until it is too late. And those who cast an early ballot can be crossed off their party’s get-out-the-vote list, allowing volunteers to concentrate on a smaller pool of stragglers.

Kevin Wagner, a political science professor at Florida Atlantic University, said the Democrats’ advantage cannot be fully dismissed: “Nobody ever wants to be behind.” He said the unanswerable question is whether this “Democratic surge” is composed of new voters, which would mean there are more ballots coming behind it. If not, the Democratic vote will slow, making it easier for the Republicans to catch up.

But he said the president has harmed his Florida campaign by disparaging mail-in voting in other states, even as he praises it in his adopted home state, a nuance that Wagner says most voters won’t notice. The state’s Republicans traditionally outperform Democrats in mail-in voting, netting 60,000 more ballots in 2016 — about half Trump’s margin of victory over Hillary Clinton.

Democrats, meanwhile, tend to outperform Republicans at in-person early voting, which would be a problem for the GOP if that remains true and the mail-in margin doesn’t shrink.

“That has to be disturbing to the Republicans,” he said.

Susan MacManus, a University of South Florida political science professor, said the wild card is the votes cast by independents. She said Florida voters who affiliate with neither party tend to be younger, which would likely benefit the Democrats — but even that is uncertain.

She said there is also the danger that Democratic voters and volunteers will see the numbers, think they have the state won and become complacent. On the other side, if the margin doesn’t start shrinking it is possible it will deflate Republican enthusiasm and depress their turnout.

“Each side has a little bit to worry about,” she said.

Trump Florida campaign spokeswoman Danielle Alvarez said Republicans are not worried because the party has better outreach and tracking than the Democrats. She said that will produce a steady wave of Republican voters between now and Nov. 3 that will erase the party’s current deficit.

“This is a marathon, not a sprint,” she said.

Florida Democrats said they are not being complacent and are pushing to get their voters out.

“Everything is on the line in this election, and we’ll continue to put in the work to ensure voters recognize their power and send Joe Biden to the White House,” state Chair Terrie Rizzo said in a statement.

Early voting in much of the state will remain open until Nov. 1, while the deadline for most mail-in ballots is Election Day, Nov. 3.

AP’s Advance Voting guide brings you the facts about voting early, by mail or absentee from each state: https://interactives.ap.org/advance-voting-2020/