Hurricane Dorian has been downgraded to a Category 2 storm with 110 mph as it picks up minimal speed – moving northwest at 2 mph.

The National Hurricane Center’s “Cone of Concern” for Hurricane Dorian no longer touches Florida, meaning forecasters do not anticipate landfall anywhere in the Sunshine State.

As of the NHC’s 11 a.m. advisory Tuesday, Dorian was a Category 2 system with 110 mph maximum sustained winds. The system is located 45 miles north of Freeport, Grand Bahama Island, and 105 miles east of West Palm Beach, Florida. 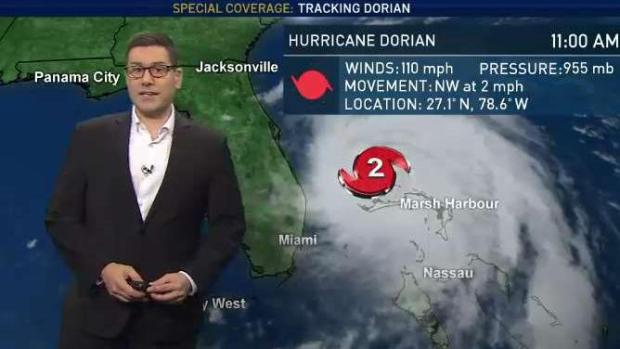 The strongest most recent wind gust recorded clocked in at 140 mph. Storm surge is up to 15 feet above normal tide levels with higher destructive waves, according to the NHC.

Residents in Grand Bahama Island are urged to remain sheltered as they continue to face Dorian’s eyewall.

“The core of extremely dangerous Hurricane Dorian will continue to pound Grand Bahama Island today,” the NHC said. “The hurricane will then move dangerously close to the Florida east coast late today through Wednesday evening, very near the Georgia and South Carolina coasts Wednesday night and Thursday, and near or over the North Carolina coast late Thursday.”

Here is a list of watches and warnings in effect:

A hurricane warning is in effect for Grand Bahama and the Abacos Islands in the northwestern Bahamas, as well as Jupiter Inlet to Ponte Vedra Beach in Florida and north of Edisto Beach to South Santee River in South Carolina.

A storm surge watch is in effect for north of South Santee River, South Carolina, to Cape Lookout, North Carolina.

A tropical storm warning is in effect for north of Deerfield Beach to Jupiter Inlet in Florida, as well as north of Ponte Vedra Beach in Florida to Edisto Beach in South Carolina.

A tropical storm watch is in effect for Lake Okeechobee.