Hurricane Irma, downgraded to a Category 3 storm ahead of its expected Sunday landfall, has shifted west. Floridians are preparing and bracing for the impact across South Florida, on both west and east coasts.

As of Saturday afternoon, the storm was considered “extrememly dangerous,” according to the National Hurricane Center.

Scott said Irma is “powerful and deadly” and will likely be a storm as bad as, if not worse than, Hurricane Andrew was 25 years ago. 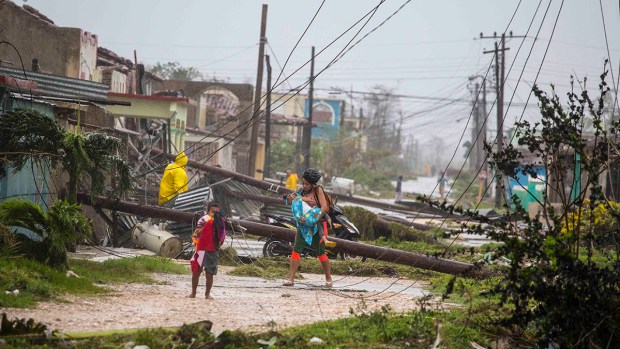 In Photos: Irma Lashes Through Caribbean as Florida Prepares

With the storm’s shift to the west, Irma is taking aim at the Tampa region. Disney World, Universal Studios, SeaWorld Orlando and Busch Gardens Tampa Bay were shuttering their parks Saturday evening and planned to remain closed Sunday and Monday.

As they braced for impact, many Floridians took to social media to share how they were getting prepared.

Don’t take chances with your safety- if you are in an evacuation zone, LEAVE NOW. For evacuation routes visit https://t.co/PdBTDyGQxH

Most Florida thing ever? @Publix#irmapic.twitter.com/P3E7gmbKA4

Cheetahs and birds, like vultures, being put in temporary and safe enclosures at @zoomiami to ride out #Irma -full report soon on @nbc6pic.twitter.com/VLFZIOV6qf

Boarded up 3 houses in 3 days, Irma prep is all done and I’m ready to rock. Time for football and good beer pic.twitter.com/sePltvO0MI

Starting to get windier over here on the Intracoastal Waterway side but not too bad yet. #StaySafeFlorida#Irmapic.twitter.com/v0J4KCGY6O

Last run for water to give to our @mightyocala family! #BossOfTheYear#TuggleNation#IrmaPreppic.twitter.com/pC4e4UFved

1) #HurricaneIrma prep is done at our main shelter. The animals are confused, but safe with enough access to food and water for days. #Irmapic.twitter.com/yOxham1V2a

Reasonably calm this Saturday evening. That will change tomorrow into Monday when Irma moves through. If we have power I’ll tweet afterwards pic.twitter.com/zILqGb4Bhw

irma got me worried �� pic.twitter.com/ZDjwzeJDgE

If you need a safer place to put your car, the city’s downtown parking garage is open and will be free. #irma#gainesville.

The skies are starting to get stormy. Irma is on her way… be safe everyone and stay indoors♡ #IrmaHurricane#Irma#GlobalGoodEmipic.twitter.com/1Ma1srdBVM

Hurricane #Irma‘s eye is seen in this new infrared image. See this image & learn about our @NASAEarth missions: https://t.co/5YOLYfLkp9pic.twitter.com/41UUPzktMW

***NOWHERE IN THE FLORIDA KEYS WILL BE SAFE***

***YOU STILL HAVE TIME TO EVACUATE***