Days after video of a teen boy attacking and throwing an elderly woman into a pool went viral, the mother of the 16-year-old spoke exclusively to NBC 6.

Shekita Johnson sat down with NBC 6 anchor Jawan Strader to describe the moment she learned her son was the teen seen in the disturbing video. 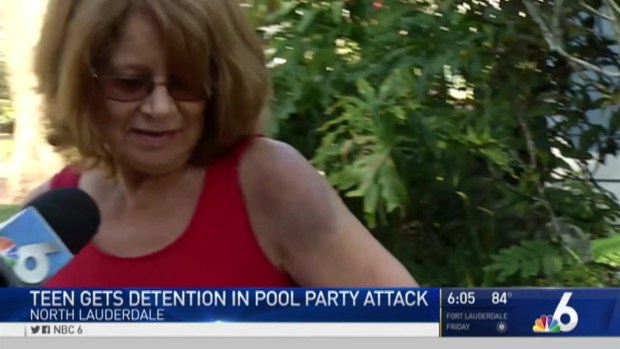 “I was in total disbelief,” said Johnson.

The 16-year-old was arrested Monday afternoon after Broward Sheriff’s Office conducted an investigation and search for the teen. He is currently under a 21-day home detention.

“He’s really remorseful for what he’s done,” his mother said. “He’s very saddened about it.”

The incident happened Saturday at a pool party at the Players Place Townhouse on Champions Way in North Lauderdale.

Cellphone footage of the attack shows 68-year-old Nancy James walking with her two dogs as she approached the group to ask them to turn down their music. A group gathers around James as someone is heard saying “throw her in” in the background. Then the teen in a red shirt picks James off the ground and they both fall to the ground. He then grabs James and throws her into the pool while also falling in himself.

The 68-year-old suffered bruises. Johnson said she understands the outrage toward her son for tossing James into the water.

“If that was my grandmother, who by the way raised me, I would have been angry,” the teen’s mother said.

Johnson is a mother of 5, and is currently a supervisor at the emergency dispatch department for the City of Miami. She says her son is a good kid and says he wants to meet James but a judge ordered the teen to stay away from the victim.