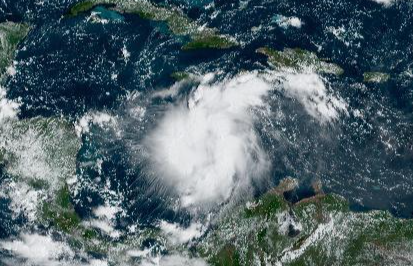 Tropical Storm Ian was expected to ramp up in intensity by Sunday over the warm waters of the western Caribbean. But from a South Florida perspective, the forecast track for the future hurricane was trending in a better direction.

Ian is expected to become a formidable hurricane, and no one in South Florida should stop monitoring it.

Since Friday, however, a greater consensus has developed among the forecast models that Ian will pass near or over western Cuba and slide into the southeastern Gulf of Mexico perhaps over 100 miles west of Key West. While there could be further adjustments in the forecast track during the weekend, the chances for tropical storm or hurricane conditions in metro Miami & Fort Lauderdale were decreasing.

For Miami, the chance of sustained tropical storm force winds dropped from 40 percent to 30 percent. For Key West, the chance of hurricane winds was cut in half from 20 percent to 10 percent. That’s because the National Hurricane Center (NHC) continued to make westward adjustments to the forecast future path for Ian.

Saturday’s NHC forecasts for what might happen next week had a Hurricane Ian passing 150 miles west of Key West on Tuesday night, and over 200 miles west of Miami on Wednesday.

For the Cayman Islands, where a Hurricane Watch was already in place, trends on Saturday were also favorable. Tropical Storm Ian had continued to move straight west instead of northwest, giving hope to those islands that perhaps there was a chance for the core of Ian to miss them to the west. But it’s going to be a close call, and a Hurricane Warning still seemed like a near-certainty.

Cuba’s biggest population centers might also be feeling better this weekend. While Pinar del Río province on the west end of the very large island still needs to brace for hurricane conditions by Monday, the possibility of Ian potentially sliding through the Yucatán Channel was increasing.

Scattered to numerous showers and some thunderstorms are in the forecast for the weekend in metropolitan South Florida, especially in the afternoons, thanks to the air mass moistening and a stalled front near Lake Okeechobee. Monday through Wednesday there will be even more widespread rain and some gusts depending on how far future hurricane Ian passes to the west.

Should Ian turn towards the northeast to cross central or northern Florida diagonally next week, some of the showers and thunderstorms even as far south as Miami could be produce strong wind gusts. An isolated tornado cannot be ruled out in some of those extreme outer rainbands, so we will need to remain alert.

However, compared to the initial track forecasts for Ian, South Florida is certainly sitting prettier and feeling more optimistic this weekend. Other parts of the Sunshine State, however, may still have to face a major hurricane next week and will need to start preparations no later than Monday.