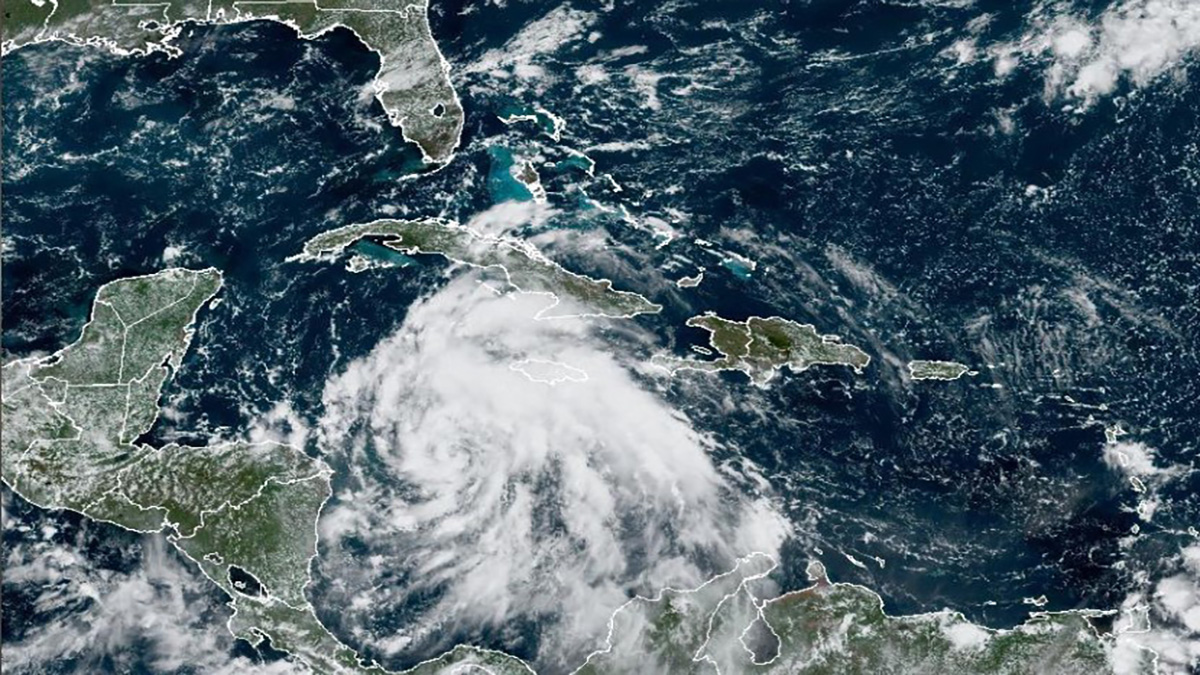 Tropical Storm Ian passed 730 miles south of Miami midday Sunday while still at modest strength. It was starting to make the much anticipated turn towards the northwest on a path that has it passing a comfortable distance away from Jamaica, and likely west of Grand Cayman late Sunday night.

According to the National Hurricane Center (NHC), Ian is expected to rapidly strengthen and become a major hurricane by Monday when it would be near or over western Cuba.

With environmental conditions so favorable for strengthening, the expectation is that the in the span between Sunday night and early Tuesday morning Ian’s winds would increase by a whopping 55 mph—from 65 mph to 120 mph—before reaching Cuba and entering the Gulf of Mexico.

Thankfully, NHC’s forecast track has the South Florida area outside of the cone of concern. The hurricane was expected to pass 200 miles west of Key West very late Tuesday night and 280 miles west of Miami on Wednesday. That would keep even the tropical storm force winds well away from the metropolitan area.

While that forecast is subject to change, there isn’t a single operational computer forecast model—and only 2 of 90 ensemble forecast members—that bring Ian’s eye to the Miami and Fort Lauderdale metropolitan area. Zero ensemble members point to the Florida Keys.

The chances for a direct hit on Miami have dropped so much, that the NHC probability of hurricane force winds in Fort Lauderdale was 1% as of 11 a.m. on Sunday.

But it’s still going to be a rainy stretch of weather in South Florida over the next several days, leading to flooding concerns. As Ian passes over the Gulf to then strike other parts of Florida potentially, Miami will likely see showers and thunderstorms accompanied by wind gusts that could momentarily reach tropical storm strength—just not in sustained fashion. An isolated tornado cannot be ruled out.

For other parts of Florida, however, Ian still poses a huge threat. The Panhandle and much of northern and central parts of the state were in the cone of concern for a hurricane which may turn northeast from the Gulf towards Florida between Wednesday and Thursday.

An expanding wind field could drive a significant storm surge towards the coast, including Tampa Bay, at a time when tides are especially high because it is King Tide season. Winds would obviously be strongest near Ian’s core, and so would the flooding rains. Tornadoes would also be more widespread for central and northern Florida.

The only saving grace is that increasing upper level wind shear may tramp down on the intensity of the hurricane just as it approaches the coast. Ian’s peak may well be while it’s out over the open waters of the Gulf of Mexico.

Despite this, future Hurricane Ian looks to produce significant impacts across much of the state of Florida throughout this new week.