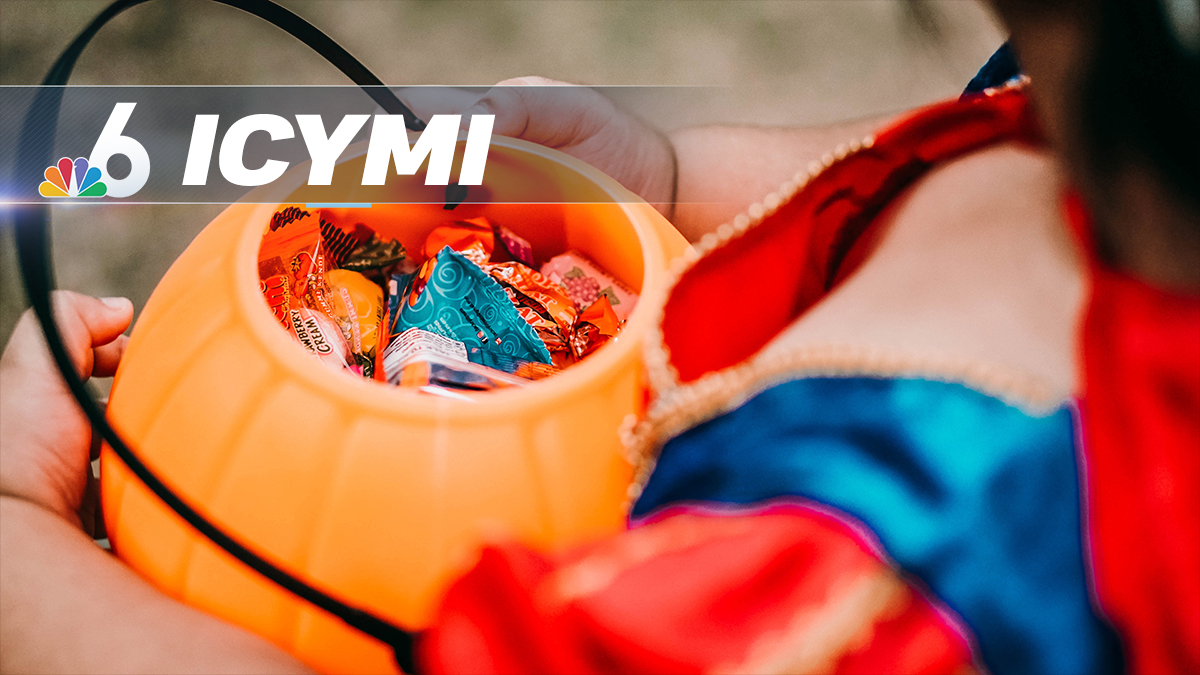 Dr. Anthony Fauci, director of the National Institute of Allergy and Infectious Disease, said vaccinated Americans should feel comfortable celebrating Halloween during an appearance on CNN’s “State of the Union.”

He also recommended unvaccinated parents get vaccinated, saying it would add an extra degree of protection. It’s just one of the many recommendations coming from health experts this holidays season.

Other safety protocols include wearing a mask in indoor public spaces and at crowded outdoor festivities.

A Hallandale Beach man is hoping anyone can identify who he believes were would-be thieves who were caught on surveillance video breaking into his car. NBC 6’s Julie Leonardi reports

‘They Knew What They Were Doing’: Surveillance Captures Car Break-In in Hallandale Beach

A Hallandale Beach man is hoping anyone can identify who he believes were would-be thieves who were caught on surveillance video breaking into his car.

It happened on Oct. 7 in a private resident parking lot of an apartment complex in the 500 block of Northeast 14th Avenue. The owner of the car told NBC 6 that he walked out to find a back window of his white Dodge Charger smashed in.

“Violated and it’s so many mixed emotions,” said the owner, who wished to remain anonymous. “We work hard man, to have what we have.”

In the footage, the suspects are seen pulling up in a dark orange Mercedes SUV in the spot next to the Dodge Charger. One of the men then smashes in the window and dives in.

The time stamp on the video shows they pulled in just after 3:20 a.m. and stayed there until almost 4 a.m., but they leave without the car.

“They knew what they were doing – they knew, they were very organized,” the owner said.

A home in a pricey Broward neighborhood hasn’t been fixed since Hurricane Wilma in 2005. NBC 6’s Willard Shepard reports

When Carol O’Brien walks out to the seawall behind her condo building on the Intracoastal just north of Sunrise, what she sees is a massive home that looks abandoned.

“It’s is a beautiful neighborhood, and love it here, but that is a terrible eyesore,” she said.

O’Brien is one of those living in one of South Florida’s top-flight communities who say their property values are taking a hit due to a home in disrepair that’s unbelievably been like this since Hurricane Wilma.

O’Brien has been leading the charge to get it fixed. She says anyone’s patience would run thin after this long.

NBC 6 reached out to the City of Fort Lauderdale, who said it is following the letter of the law and the building code when it comes to what’s going on with this property.

The NBC 6 Investigators examined the last two years of code citations where Fort Lauderdale cited the property owners. There were 16 citations in all — the owners ended up complying except once. The most serious violations were that the construction site was not maintained — an abandoned property — and an unsafe structure. That citation remains open, and earlier this year, triggered a hearing before a judge who gave the owners 63 days to comply or the city will move to fix or will demolish the property.

A North Miami Beach restaurant manager says surveillance cameras outside of his business captured a man putting a GPS tracker on his vehicle.

The footage shows a man bouncing a ball in the parking lot outside Thai House II Thursday night. Once the coast is clear, he is seen kicking the ball and then going underneath the car parked outside the restaurant.

A restaurant employee in a white car notices the strange behavior and zips around to confront him about what he was doing.

“The employee came back right away and said, ‘Hey man, what are you doing to my friend’s car?’ And he said, ‘Oh, I’m just picking up the ball,'” said Kim Hong, the restaurant manager. “But my driver text me and say you might want to check under your car, there’s some suspicious guy that goes under your car.”

After Hong closed the restaurant, he checked under his car and found a GPS tracker.

Hong filed a report with North Miami Beach Police, who have also impounded the tracker.

Questions now arise of whether this was a private investigator or someone trying to commit a crime.

The zoo’s communications director showcases the newest way you can see the beautiful birds.

In collaboration with the Ron Magill Conservation Endowment and Wildlife Rescue of Dade County, the world can now go online for free and connect to the livestream for an intimate look at the lives of a bonded pair of bald eagles as they continue to build their nest and raise young to become the next generation of these majestic creatures.

This is one of the few eagle nest cams in the world that will allow viewers to see the behaviors that lead up to the actual construction of the nest, in addition to the hopeful laying of eggs and rearing of chicks, Zoo Miami said in a news release.

It must be noted that although it is hoped that this pair of eagles will be able to successfully raise offspring, nature can often be cruel.

Zoo Miami warns viewers that it will have no influence or control over the behaviors of these birds and there are many things that can go wrong. For unknown reasons, the parents may abandon the nest, lay eggs that never hatch or get eaten, or if eggs do hatch, the hatchlings may not survive.

The parents may even bring back prey that viewers may find disturbing and the feeding of that prey to the eaglets can be quite graphic.

Get Stories That Matter to You in Your Inbox, Sign Up for NBC 6 South Florida’s Newsletters

So much news, so little time. Stay on top of the latest breaking news and other top headlines of the day with our email newsletters. We have lots of options to keep you informed.

Our digital reporters send a Breaking Newsletter whenever there’s urgent local, state or national news. We send our News Headlines newsletters every day at 7 a.m., noon and 8 p.m., listing top headlines of the day. A quick scan gives you a good sense of what’s happening in the news and you can click through to read the full stories.

The Beijing Winter Olympics will kick off on Feb. 4, 2022. We can’t wait to bring you all the Olympics insights, results and viral moments straight to your inbox at 8 a.m. Click here to sign up for our Olympics Headlines newsletter. Meanwhile, our Sports newsletter delivers the top sports headlines of the day throughout the year.

Our daily weather forecast newsletter prepares you for the day and week ahead. And our entertainment newsletter delivers the latest headlines about movies, music, TV, award shows and celebrities. The contests & special offers newsletter gives you a chance to win prizes and get great deals from NBC and select 3rd parties.