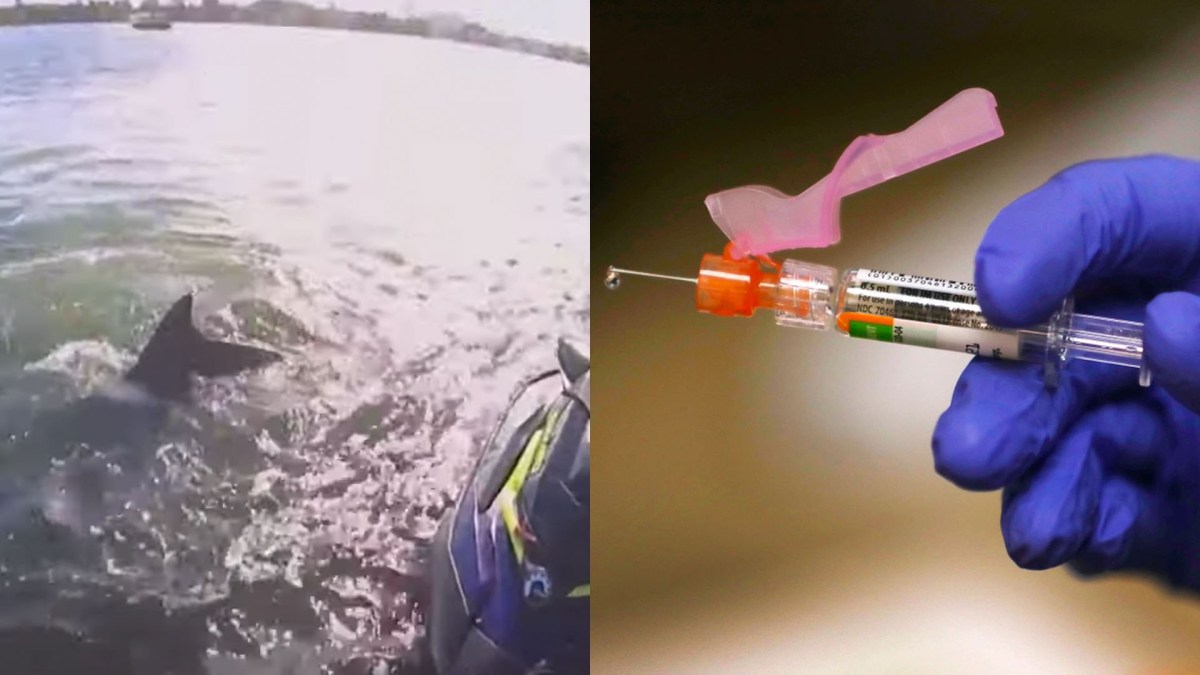 A stranded dolphin was saved by a South Florida man who was jet skiing when he saw the struggling animal in the water, video shows.

Footage shows the man, identified as Nick Tuduri by Florida Highway Patrol, jet skiing with a friend in Biscayne Bay when he notices a flailing dolphin. Immediately, Tuduri leaps into action.

He notices the dolphin’s tail is caught in a trap. Afraid that the female dolphin will drown, Tuduri reaches into his jet ski to grab a knife.

After struggling to get a hold of the trap and the dolphin’s tail, he finally is able to cut the dolphin free.

Video captured by a South Florida man shows the moment he was able to save a dolphin while jet skiing in Biscayne Bay. NBC 6’s Alyssa Hyman reports

While Florida’s governor is aiming for health care workers and seniors to be the first up to get a COVID-19 vaccine, there are still a lot of questions about children and schools.

COVID-19 and a vaccine were the main topic during a parent-teacher association webinar with Miami-Dade County Superintendent Alberto Carvalho on Wednesday, where it was discussed whether the vaccine could become mandatory for students.

Carvalho told PTA members he’s working with three companies to make sure his district has a plan once there are enough vaccines for students and kids.

“I believe that if it ever becomes mandatory, it will not be this school year, it would be at the earliest for the following school year. And again, this is based on private conversations I’ve had with medical experts, just on the basis of what’s known at this point nationally.”

While Florida’s governor is aiming for health care workers and seniors to be the first up to get a COVID-19 vaccine, there are still a lot of questions about children and schools. NBC 6’s Jamie Guirola reports

Testing at the terminal: It’ll soon be here.

A COVID-19 testing site is set to open next week at Fort Lauderdale-Hollywood International Airport for travelers.

Two tests types will be offered by an online appointment system: a Rapid Antigen test that gives results in 30 minutes and a PCR or saliva swab test with results within 48 hours.

NBC 6’s Derrick Lewis has more on what those flying into Fort Lauderdale/Hollywood International Airport can expect starting December 9th.

Police are searching for two women who were seen on surveillance camera pouring lighter fluid on the front porch of a Miami Gardens home and then setting it on fire early Wednesday morning.

“I feel unsafe,” said Keaisha Franklin, who lives on 183rd Street. “I feel unsafe for my family. I haven’t been to sleep yet.”

Franklin said the incident happened around 12:30 a.m. She says she doesn’t know the women in the video but believes she’s being targeted by an ex-boyfriend.

Buried under the headlines of the pandemic is a persisting problem.

Opioid addiction has ruined so many lives and families, especially after there was an explosion in usage that began in the early 2000’s. But the problem has only gotten worse now that it’s being compounded with the coronavirus pandemic.

At the start of the pandemic, many drug program resources were reduced or eliminated. The programs are starting to return, but they are nowhere near where they need to be to fully help people battling substance abuse.

Florida Gov. Ron DeSantis reported a 62% increase in overdoses in Florida in the last six months compared to the same time last year.

Opioid addiction has been a persistent problem and it has gotten worse during the pandemic. NBC 6’s Johnny Archer speaks to families devastated by addiction