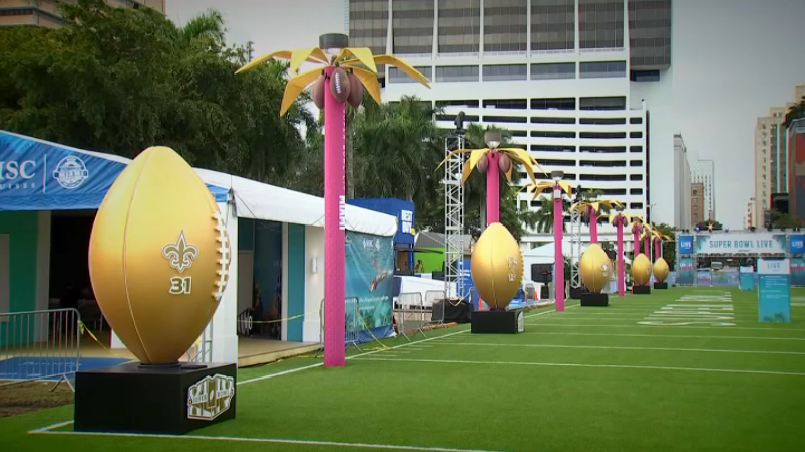 For the first time in a decade, the National Football League’s biggest game of the season takes place inside Hard Rock Stadium – and with the 54th edition of the Super Bowl taking place in South Florida, events across Miami-Dade and Broward are also taking place. Here’s a complete list of some of the top events you can take attend starting the week of Super Bowl LIV in Miami Gardens.

The U.S. Coast Guard is working to keep South Florida’s waters safe during Super Bowl LIV. Tight security will be a top priority from Hard Rock Stadium to Biscayne Bay, where the Coast Guard is enforcing a special security zone on the water, as more nautical traffic is expected. “Preparation for the Super Bowl has been an all hands on deck evolution,” Capt. JoAnn Burdian said at a news conference Friday.

Tokyo put on a flashy fireworks display on Friday to mark the 6-months-to-go milestone for this year’s Olympics. The show took place high above a barge stationed in Tokyo Bay that supports a massive replica of the five Olympic rings, a reminder the games are almost here. Japan residents needed to enjoy the fireworks. These may be the last for awhile.

Miami-Dade Unveils Finalists for Teacher of The Year Award

If you walk into Ashley Vangates’ classroom at George Washington Carver Elementary School in Coral Gables, you’d better be ready for the tidal wave of energy to hit you. “Are you ready?” Vangates shouts, and the fourth graders respond with, “Good afternoon, Miss Vangates!” The mood is contagious. Vangates, as well as Lisa Jones, Vanessa Valle, and Stephen Pereira have all been nominated for Dade’s Teacher of the Year, which will be announced next week.

Police are investigating after video of brawl involving two transgender women at a popular South Florida pizzeria went viral. The two transgender women said they were eating pizza in the early morning hours of Dec. 8 at Rey’s Pizzeria in Hialeah when two men started harassing and mocking them. In the now viral video, an employee of the pizzeria is seen trying to de-escalate the situation as the verbal argument continues.