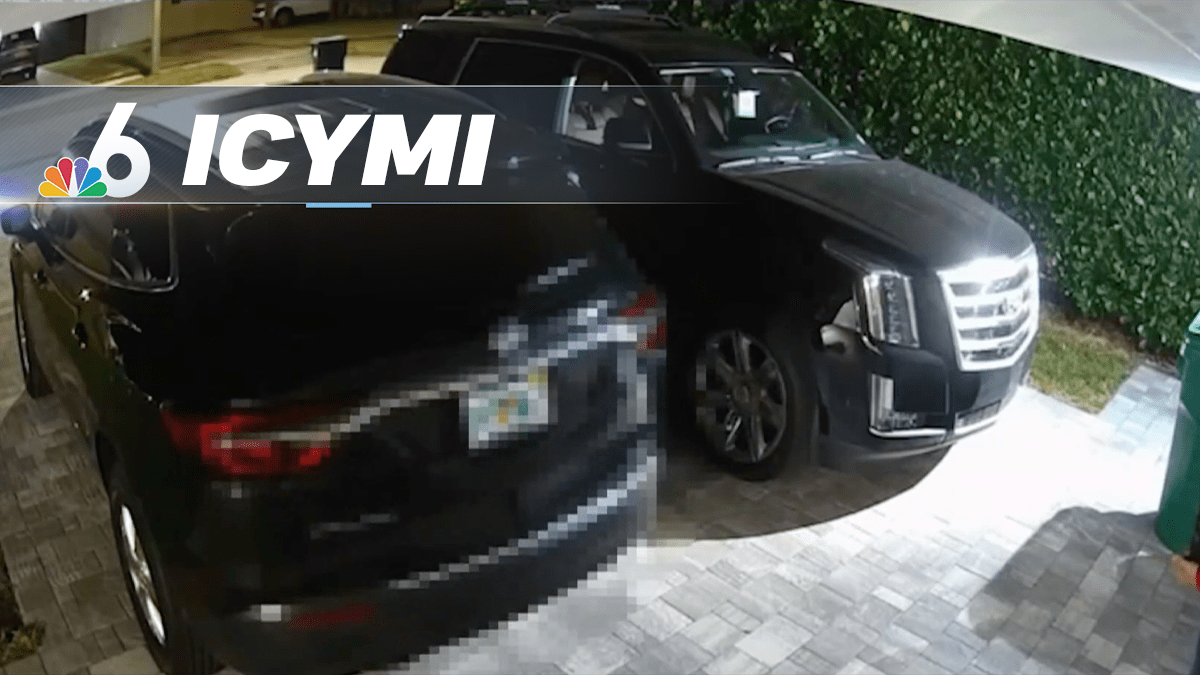 Thieves Are Using Technology to Steal Cars. Here’s How to Stop Them

Surveillance video captured a man in a red hoodie and another man trying to get inside a black SUV in the middle of the night.

The SUV’s owner said the men were in his driveway to steal his Cadillac Escalade.

“I saw two gentlemen – one waiting by the car to open the vehicle and another one in a red hoodie with something that looked like a shoebox with an antenna and some lights,” Manny Reyes said.

Police and tech experts say the men are using a device that intercepts the signal from your key fob — the signal that opens the door and can start the car.

NBC 6’s Steve MacLaughlin takes a look at the reasons for the increase in the number of storms over recent years.

The National Hurricane Center issued its first tropical weather outlook on Sunday regarding weather conditions in the Atlantic basin before the start of the hurricane season.

According to the outlook, the formation of tropical cyclones is not expected for the North Atlantic, the Caribbean Sea or the Gulf of Mexico during the next 5 days.

The outlooks are issued four times daily from May 15 to Nov. 30 and describe significant areas of severe weather and its potential for tropical cyclone formation. In the event of hurricanes or tropical storms in the Atlantic, the NHC usually issues more.

Although the official date for the start of the hurricane season in the Atlantic basin is June 1, cyclones have appeared earlier in the last several years.

A partnership with Miami-Dade Schools and Microsoft is opening doors to tech careers for students. NBC 6’s Ari Odzer reports

500,000 is a big number. It’s the number of jobs currently available nationwide in the computer science field.

So it’s not surprising that tech giant Microsoft would be partnering with local school districts to recruit kids into the industry. They’re doing it by bringing computer science professionals into the classroom to inspire students.

“There is a lot of opportunities for you guys to join the computer science field,” Willy Orozco said to an AP computer science class at Booker T. Washington Senior High School in Miami today.

When someone from Microsoft talks, the kids listen.

Frustrated viewers reached out to NBC 6 Responds after being locked out of their social media accounts. NBC 6’s Sasha Jones reports

Locked Out: How a Social Media Customer Service Gap Is Costing Users

Frustrated viewers reached out to NBC 6 Responds after being locked out of their social media accounts.

It’s a common issue, but for the people our team spoke with, it hasn’t been easy to fix.

Hacked and locked social media accounts have been on the rise since the start of the pandemic. The Federal Trade Commission tracks complaints of social media identity theft. The FTC shows complaints in this category saw a 48.4% increase since 2019.

“A practice that does not have a social media following is a dead practice,” Dr. Daniel Careaga said.

Patricia Ruiz, Executive Director at Miami Speech Institute, shares how we can help children navigate life with a stutter during Stuttering Awareness Month.

How to Help Kids Navigate Life With a Stutter

Roughly three million Americans have a stutter — most of them, children.

According to the National Institute on Deafness and Other Communication Disorders, stuttering occurs most often in children between the ages of two and six as they develop their language skills.

“Stuttering is a big deal,” says Patricia Ruiz, Executive Director of Miami Speech Institute, “I feel that our community is not educated enough on it actually being a disorder that affects many people in many different ways.”

May is Stuttering Awareness Month, making this the perfect time to educate yourself on stuttering and learn how you can support a child who may be struggling.

Across the country, there are more violent attacks being reported in schools. NBC 6 wanted to know if the problem is getting worse, so we pulled the numbers to get answers.

‘My Daughter is Traumatized’: School Fight Numbers Show Only Part of the Problem

Videos of school fights are popping up almost weekly in South Florida. The videos show violent attacks and are landing students and adults in handcuffs.

“Every night I continue to play that video and audio so that I will continue to push,” said Christina Neptune who said her daughter was knocked unconscious at Gulfstream Academy in Hallandale Beach.

She shared what she said is video of the attack with NBC 6 News.

“I wish she didn’t have to go through it, because now I have a child who is living in fear of going to school,” said Neptune.