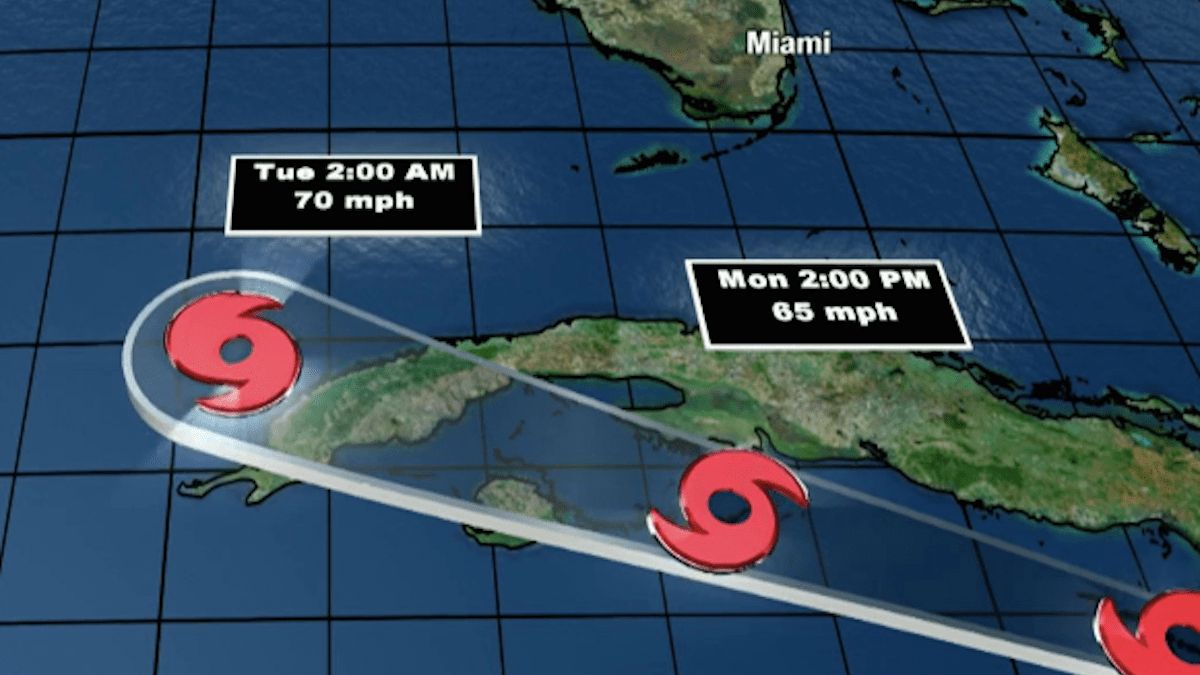 The 8 a.m. advisory shows the system has winds of 65 miles per hour while currently 125 miles east-southeast of Cayo Largo, Cuba, according to the National Hurricane Center, and moving west-northwest at 21 m.p.h.

A tropical storm warning has been placed from Key West northward to near Marathon, areas that could expect tropical storm force winds and heavy rainfall starting as early as Monday morning.

Tropical storm warnings are also in effect for the Little
Cayman and Cayman Brac, portions of Cuba as well as the Dry Tortugas.

NBC 6’s Jamie Guirola spoke with tourists and county officials, who urge everyone to remain on guard for what could be a wicked Monday with the weather.

They
are recommending that those who live on boats find shelter on land as seas are
expected to be rough as Laura passes to the west into the Gulf of Mexico. They
also asked that those who had already evacuated wait until Tuesday before
returning.

The
National Weather Service says the Keys will see severe weather, isolated tornadoes,
and coastal flooding three to six inches higher than king tides, especially on
the Atlantic side. Residents and visitors should be aware of hazardous weather
conditions in the Florida Keys starting Monday morning through Tuesday morning.

“Residents should continue to monitor the storm and be prepared for severe weather, 20-30 mph winds with gusts up to 50 mph, and strong squalls,” said Shannon Weiner, Monroe County Emergency Management Director. “Please secure all boats and outside items by this evening for this event.”

Laura was forecast to move along Cuba’s southern coast during the day before entering the Gulf of Mexico and heading toward a stretch of U.S. coast later in the week, most likely as powerful as a Category 2 hurricane.

Laura
caused the deaths of at least 11 people in the Dominican Republic and Haiti,
while knocking out power and causing flooding in the two nations that share the
island of Hispaniola.

Haitian
civil protection officials said they had received reports a 10-year-old girl
was killed when a tree fell on a home in the southern coastal town of
Anse-a-Pitres, on the border with the Dominican Republic. Haiti’s prime
minister said at least eight other people died and two were missing. In the
Dominican Republic, relatives told reporters a collapsed wall killed a mother
and her young son.

Hundreds
of thousands were without power in the Dominican Republic amid heavy flooding
in both countries.

Meanwhile, Tropical Storm Marco is expected to continue to head across the Gulf, reaching more strength when it approaches the northern Gulf Coast Monday. The storm will then slow down and move west Monday night, across southern Louisiana and into eastern Texas.

The 8 a.m. advisory has winds of 50 m.p.h. while the center sits just over 130 miles per hour south-southeast of the mouth of the Mississippi River and moving northwest at 10 m.p.h.

A
Hurricane Watch was in effect from Intracoastal City, Louisiana to west of
Morgan City and Metropolitan New Orleans. Forecasters predict life-threatening
storm surge and hurricane-force winds along portions of the U.S. Gulf Coast.

If
both storms survive the until Monday, the National Hurricane Center forecast
that Laura would as head a hurricane toward the central Gulf Coast around
Louisiana, Mississippi, Alabama and the western Florida Panhandle, while Marco
aimed at Texas.

“A
lot of people are going to be impacted by rainfall and storm surge in the Gulf
of Mexico,” said Joel Cline, the tropical program coordinator for the National
Weather Service. “Since you simply don’t know you really need to make
precautions.”

Two hurricanes have never appeared in the Gulf
of Mexico at the same time, according to records going back to at least 1900,
said Colorado State University hurricane researcher Phil Klotzbach. The last
time two tropical storms were in the Gulf together was in 1959, he said.