Just steps from the protests calling for Puerto Rico Gov. Ricardo Rosselló’s ouster is a boarded-up souvenir shop in the historic and tourist district of Viejo San Juan.

Paul Kelly, the owner of Handcraft Store on Calle Fortaleza, showed a framed painting that once hung outside his store depicting the street leading up to the governor’s mansion and the iconic colorful umbrellas that hung overhead. The frame is now blistered and melted, a byproduct of the violent protests amid the governor’s “Chatgate” scandal.

That framed painting speaks volumes — it shows what La Fortaleza, or the governor’s official residence, used to look like up until just days ago before the umbrellas came down and the barricades went up.

Demonstrators continued to swarm the entrance of Roselló’s mansion in a new series of protests Friday. In the days before, thousands of Puerto Ricans came out to Old San Juan and chanted, marched and waved the island’s flag in protest of what they call a corrupt government. Celebrities such as performers Ricky Martin, Bad Bunny and Residente joined. 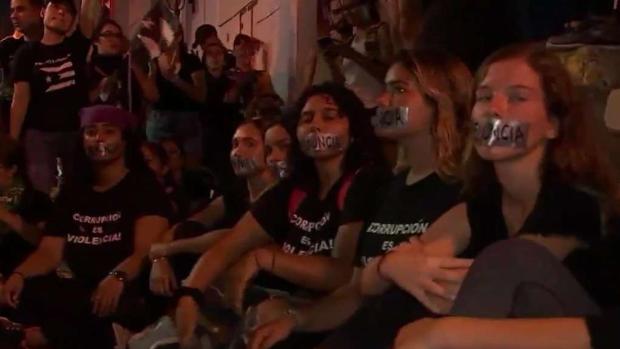 The protests are a result of the hundreds of online messages that leaked between the governor and his senior staff. In the profanity-laced private chat, Rosselló and the male members of his administration mocked women, gays and the victims of Hurricane Maria. Roselló has refused to step down.

More protests are planned through the weekend including one on Monday that is expected to shut down a major highway.