A South Florida McDonald’s worker jumped into action to save the life of an off-duty police officer Tuesday.

What started as a regular breakfast order at a McDonald’s in Doral quickly turned into an emergency as Pedro Viloria was serving an off-duty Miami-Dade police officer and her two children through the drive-thru window. He says the customer ordered and paid without a problem but when he went to hand her the food, something was wrong.

“I see she hardly breathing and I thought that’s not normal,” Viloria said.

And then he says the vehicle started moving and it was clear the driver no longer had control.

“Her kids were screaming,” he said. “I thought I gotta get to that car.”

So the 22-year-old McDonald’s worker did what he had to do.

“I ran as fast as I could, put myself in front of the car,” he said.

Luckily the curb stopped the vehicle from going into traffic. All of a sudden, help was there, Viloria said.

6 Tips to Keep You Safe in a Snowstorm “When I looked back there was all these rescue” workers, he said.

Surveillance video from the McDonald’s shows a woman running to help and an officer who had, luckily, come in for breakfast around the same time.

“I was with the kids – I was trying to tell them it will be all right, the kids were breaking my soul,” he said.

The off-duty officer was rushed to a nearby hospital.

“She’s alive and that’s enough, if I had to die to save that woman I would have,” Viloria said.

As for why he jumped to help a perfect stranger?

“My brain was on hero mode!” he said.

What he didn’t know at the time was who he was helping. 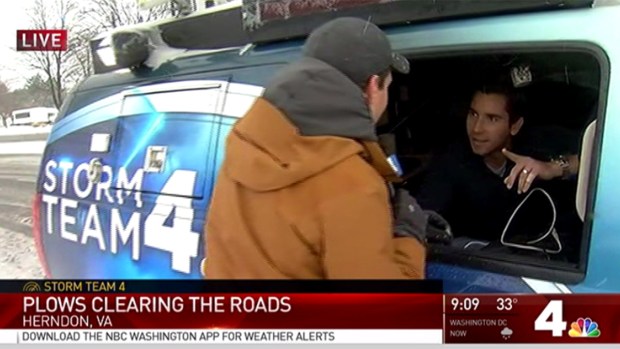 “What! I saved an officer’s life? I can’t believe this,” he said.

Alex Menendez, the owner of the McDonald’s, said his thoughts and prayers are with the officer and added that he was proud of his employee.

“He is an excellent employee, so it didn’t surprise me that he took immediate action and jumped through a window to help save this woman,” he said in a statement. “And he was not the only member of the team that played a pivotal role in ensuring she received the medical attention she needed. A second employee, who asked to remain unnamed, assisted with CPR.”