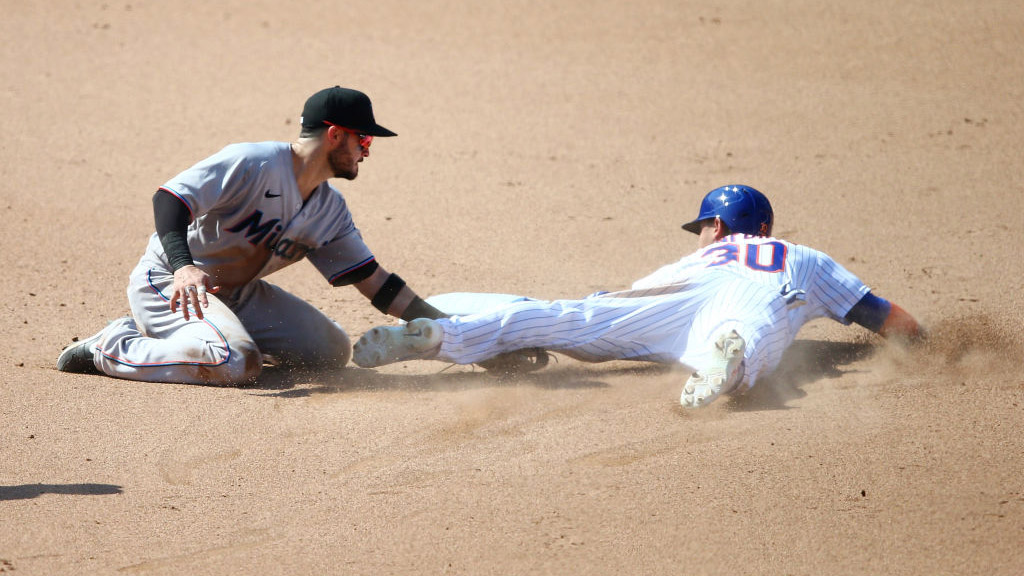 Jacob deGrom dodged trouble for five innings, rookie Andrés Giménez had three hits and scored three runs, and the New York Mets won a home series for the first time this season by beating the Miami Marlins 4-2 on Sunday.

DeGrom (2-0) allowed two runs and seven hits, marking the 25th time in his past 27 starts he permitted three runs or fewer. He struck out six, walked two and threw 98 pitches.

Winner of the last two NL Cy Young Awards, deGrom had an issue with the middle finger on his right hand during a 32-pitch second inning. He loaded the bases on two walks and an infield single, and a trainer briefly examined him.

“There’s a little hot spot, I guess you could refer to it as,” deGrom said. “It’s not starting to get a blister, but I’ll probably file it off and hope it’s better for the next one. I felt it a little bit in Atlanta, just the way the ball was coming off my finger.”

After getting checked out, deGrom fanned Monte Harrison and retired Jonathan Villar.

Jesus Aguilar hit a two-run homer in the fifth for the Marlins, who lost their second straight after getting off to a 7-1 start despite 18 players testing positive for the coronavirus. Aguilar hit deGrom’s fastball to left field and then picked up his own bat after crossing the plate.

“We had numerous chances throughout the day,” Miami manager Don Mattingly said. “I thought (deGrom) did a pretty good job. Blister or not, he’s still 98, 99 (mph).”

“That second inning, it was a lot of stress, a lot of pitches,” Mets manager Luis Rojas said. “Jake, he’s got the stuff to get out of an inning like that.”

Edwin Diaz struck out Harrison to end the eighth with runners at second and third. Seth Lugo tossed a scoreless ninth for his third save.

Giménez scored on an RBI groundout by Jeff McNeil in the third after stealing second base. Giménez also doubled and scored on a base hit by Brandon Nimmo in the fourth, and came home on McNeil’s sacrifice fly in the sixth.

“We’re having fun watching him play. And this kid, he’s a sponge,” Rojas said. “Every day he’s learning more and more, and his abilities are getting better and better.”

Marlins rookie Eddy Alvarez had the first three hits of his career, stole his first base and reached four times. He also made a diving stop at second base to rob McNeil in the third and prevent a potential two-run single.

The Mets took a 2-0 lead in the third when McNeil hit a sharp grounder and Michael Conforto’s fly ball deflected off left fielder Corey Dickerson’s glove for an error.

Villar, the Marlins’ leadoff man, had another tough day at the plate, going 0 for 5 with four strikeouts. He entered with five strikeouts in his first 24 at-bats this season, and Sunday was the ninth time he struck out four times. He did it three times last year when he fanned a career-high 176 times for Baltimore. Villar was also among several Marlins frustrated with plate umpire Mark Carlson. After his fifth-inning strikeout, Villar slammed his bat on the plate and, after getting called out on strikes, gestured at Carlson to express his view that the pitch was outside. “He’s frustrated,” Mattingly said. “He wants to contribute. He knows ball and strikes. Guys who know the strike zone when they complain, they’re usually right.”

Besides getting his first career three-hit game, Giménez showed off some of his baseball instincts. He advanced from first to third after a bunt single in the sixth, looking back at right fielder Matt Joyce to gauge his chances. That came after Giménez dashed from second base into right field to back up first baseman Pete Alonso, who made an error on a grounder by Alvarez. “He’s a good player,” deGrom said about Giménez. “He’s been impressive so far. I just enjoy watching him play.”

Mets: RHP Michael Wacha (right shoulder inflammation) was placed on the injured list. Rojas said Wacha felt pain in the back of his shoulder after allowing four runs in five innings Friday. Wacha said he will get treatment and will not pick up a ball for two to three days. … 2B Robinson Canó (groin) is slated to take at-bats at the team’s alternate site in Brooklyn, and Rojas said Canó is responding well to treatment. … OF Jake Marisnick (strained left hamstring) is slated to take at-bats in Brooklyn.

Marlins: RHP Elieser Hernandez makes his second start when the Marlins open a series against Toronto in Buffalo on Tuesday. Hernandez allowed an unearned run over 4 1/3 innings Wednesday in Baltimore.