Officer Jose R. Acosta was arrested Friday on charges of burglary and grand theft following an operation by City of Miami Police, the Miami-Dade State Attorney’s Office and the Florida Department of Law Enforcement.

Acosta, who had been with the department since May 2016, was fired after his arrest, officials said. Attorney information wasn’t available.

At a news conference Monday, Deputy Chief Luis Cabrera said the investigation began after the department had received complaints in February of an officer taking money during traffic stops. 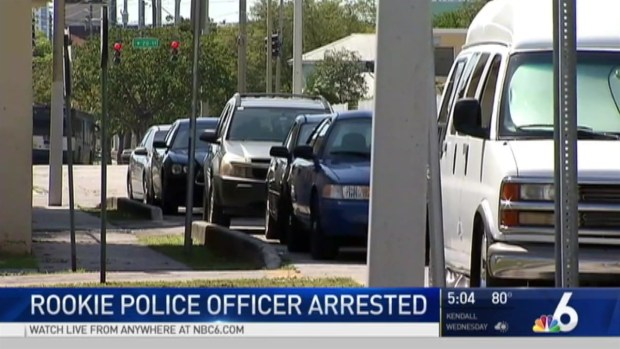 On Friday, Acosta had stopped a car in the area of Northwest 3rd Avenue and Northwest 22nd Street and took $940 from the driver, Cabrera said. The driver was part of the undercover operation, officials said.

Acosta released the driver without issuing a citation or notifying dispatch that he had made a stop, Cabrera said.

NBC 6 obtained exclusive surveillance video of Acosta’s arrest, which shows officers swarm a Little Havana apartment building Friday night. Minutes later, the video shows Acosta in handcuffs and being escorted by two officers who place him in a car headed for jail.

“It appears that Officer Acosta sold his integrity and sold out on his community, instead of seeking to rid his community of crime he became a criminal himself,” Miami-Dade State Attorney Katherine Fernandez Rundle said at Monday’s news conference. “Such offenses impact the honor of every single good, hardworking honest law enforcement officer in this city and in this county.”

Miami Mayor Tomas Regalado said Acosta’s alleged on-duty criminal behavior shouldn’t reflect on all of the other officers in the department.

“The mission of the police department of the City of Miami is to protect and serve. And that mission will continue,” Regalado said.

Cabrera said police are looking for more possible victims and urged members of the community to come forward.