Gov. Ron DeSantis urged Florida residents to prepare for impacts from Tropical Storm Dorian as much of the Sunshine State remained in the system’s forecast cone Tuesday evening, though much uncertainty remained about the storm’s future.

The storm was maintaining maximum sustained winds of 50 mph as it moved west-northwest at 13 mph about 80 miles west of Dominica and 330 miles southeast of Ponce, Puerto Rico, according to the 5 p.m. ET update from the National Hurricane Center.

In Puerto Rico, residents were preparing for rain and power outages as the storm neared the island. 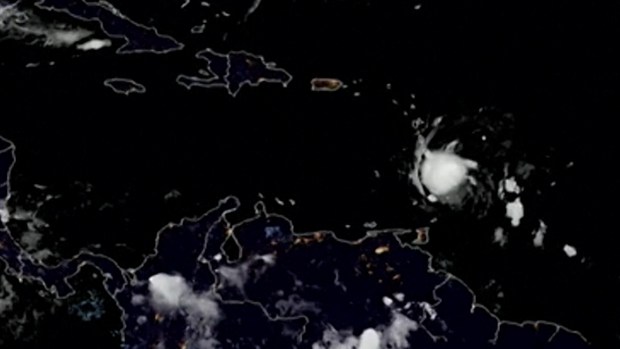 It remained unknown what effects South Florida would feel from the system.

Earlier Tuesday, DeSantis tweeted that he had been briefed by Florida Division of Emergency Management Director Jared Moskowitz, and had been in contact with county emergency management directors to make sure the state was ready.

“Based on the current track of #TropicalStormDorian, all residents on the East Coast should prepare for impacts, including strong winds, heavy rain and flooding,” DeSantis tweeted.

NHC forecasters said Dorian was expected to turn toward the northwest on Wednesday, with the center moving across the northeastern Caribbean Sea Tuesday night. It was forecast to pass over or near western and central Puerto Rico on Wednesday, and move near or just east of eastern Hispaniola Wednesday night.

On Thursday night and Friday, the center of Dorian was forecast to move near or to the east of the Turks and Caicos and the southeastern Bahamas.

Dorian was forecast to be near hurricane strength when it approaches Puerto Rico on Wednesday, though some weakening was expected after Dorian moves across the higher terrain of Puerto Rico Wednesday night. Dorian was expected to gradually re-strengthen on Thursday and Friday while passing near or to the east of the Turks and Caicos and southeastern Bahamas.

“Dry air continues to plague Dorian, and interaction with the mountainous terrain of St. Lucia will likely hinder significant development in the short term. However, the models continue to indicate that the upper-level flow pattern and shear conditions are expected to remain favorable for strengthening throughout the forecast period,” The NHC said Tuesday. “Uncertainty in the intensity forecast later this week remains higher than usual due Dorian’s potential interaction with Hispaniola and Puerto Rico.”