Broward Schools and the Broward Sheriff’s Office said they had no comment on the suit. 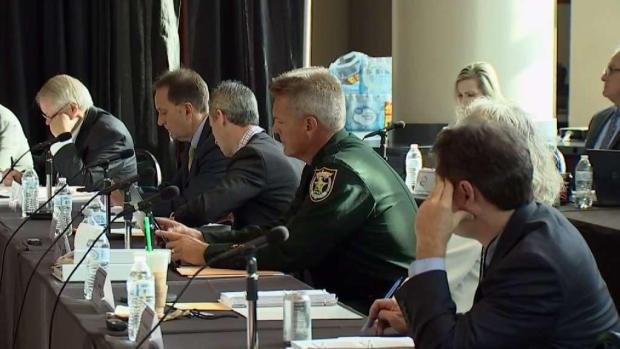 The suit also claims Peterson had unlawfully taken $200 from a student the morning of the Feb. 14 shooting, accusing the student of being a drug dealer. He eventually gave the money back to the teen, who claimed he was taking his girlfriend out for a Valentine’s Day dinner that night, the report said.

Peterson later failed to protect the students when the shooting unfolded, the suit claims.

“His job duties required him to run towards danger at risk of life and limb, and not to run away from danger for the sole purpose of sole-preservation,” the suit reads. “His arbitrary and conscience-shocking actions and inactions directly and predictably caused children to die, get injured, and get traumatized.”

The suit, which doesn’t name shooting suspect Nikolas Cruz, claims Jordan “refused to allow emergency personnel to enter the school, even into the safe areas, to save lives” and Medina “failed to stop Shooter, question him, or lock down the school, even though he saw Shooter walk past him and he recognized Shooter to be a known danger to the school.”

Medina’s attorney said the lawsuit is a tactic by attorneys to get publicity and said he’d be shocked if it isn’t dismissed.