Crews responded after multiple boats and a building caught fire at a marina near the Miami River Tuesday.

Footage showed flames and thick smoke shooting out of the boatyard office at the scene as firefighters worked to get it under control.

Officials said the first crew on the scene saw flames shooting 20 feet into the sky. The heavy fire made it hard to get inside and when the roof started to collapse and the walls became unstable, they worked to stop it from spreading to nearby businesses and homes. 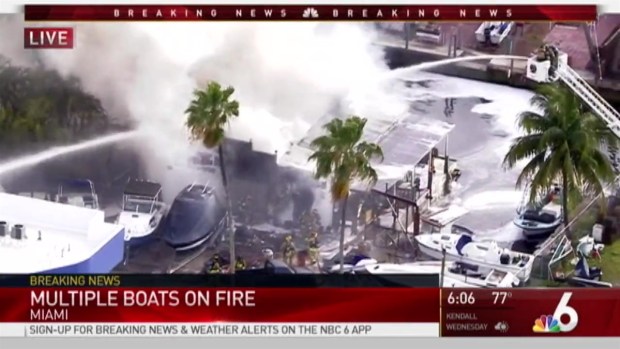 Two people were inside working on a boat when the fire started. Both escaped safely but one man’s hair was burned.

Fire rescue officials said no other injuries had been reported.

Two boats were destroyed and several others that were in storage sustained heat damage, officials said.

“At least no one’s hurt, everybody’s safe, it’s getting taken care of. You know, whatever, it’s a step back but nothing that you can’t move forward from,” said Mauricio Vasquez, who works at the marina.

The cause of the fire remains under investigation.