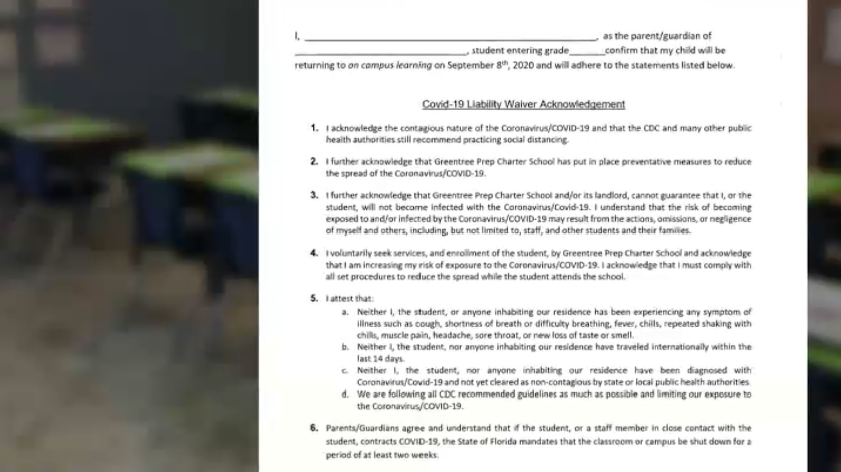 There’s another dilemma some parents are facing when it comes to educating their kids this fall — NBC 6 found a Broward charter school is sending out legal waivers telling parents it is not responsible if their child gets COVID-19 while taking in-person programs.

Greentree Preparatory Charter in Southwest Ranches is an A-rated school that has gifted programs and focus on math and science. The high marks are reasons the Gonzalez family wanted their daughter to enroll for in-person learning in a few weeks.

The parents of Sophia Gonzalez said their daughter had two choices — to start the fall online or to come for in-person instruction. Juliana Gonzalez, the student’s mother, said the waiver stated the school will take preventative measures to reduce the spread of the virus, but they aren’t liable if the child becomes ill.

“I thought it was not a document that would make me feel safe for my child to be at the school,” Juliana Gonzalez said.

The waiver says in part, “Greentree … cannot guarantee … the student will not become infected with the coronavirus … becoming exposed may result from the actions, omissions, or negligence of myself, staff, and other students and their families … I understand this release discharges Greentree from any liability or claim.”

“That’s the school where you want your child to be safe, but they are not sending you a document that gives you that good sense that you send them and they are going to be in a good environment,” Juliana Gonzalez said.

At Greentree, masks and shields are provided to staff and students, school officials said. A survey conducted among parents shows that 40% of them want to return to in-place learning. That’s when officials came up with the waiver.

“Our goal is to give our parents the best choice of education that they need for their child,” said Greentree’s director of operations Elizabeth Gonzalez, who has no relation to the Gonzalez family. “I understand the waiver may catch some parents off guard, but we really have to do that in order to protect everyone.”

“I look at this being very tricky—very tricky with a whole bunch of interest and reasons that are weighing on both sides of the liability waiver,” NSU Shepard Broad College of Law professor Mike Flynn said.

Schools asking parents to sign a waiver want to protect their operations from legal action even if they make a mistake.

“That’s the whole point of the waiver. That’s what the school is trying to accomplish,” Flynn said. “They are trying to limit their exposure even if they’re negligent, and that has been successfully argued in certain kinds of cases.”

“But when she goes for the second part of the school year — if that waiver is going to remain the same, then I don’t want my child to attend because they are not responsible for anything,” she said.

Flynn said it would help parents if the school laid out in the document exactly what it is doing to prevent COVID-19 from spreading in the building. Expect other charter and private schools to also have these waivers, he said, Even if it’s signed, and if it can be shown any school was completely derelict in taking measures, the waiver may be overcome in court.