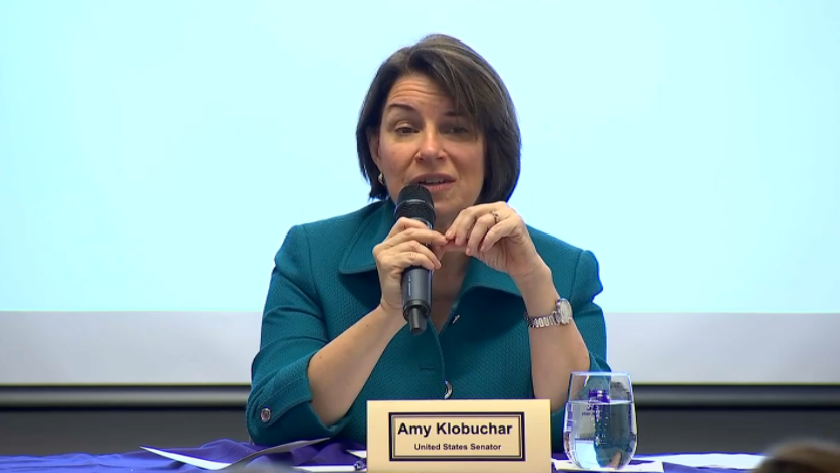 She’s also well aware that Democrats can’t take for granted that union workers are just going to go in lockstep to the ballot box and vote for them.

On Friday, Klobuchar came to meet with hospital, transportation and teacher union leaders and gave them a clear message to take back to their members: that they are a surging force once again.

An Emerson College poll this week in Iowa shows Klobuchar trailing Joe Biden, Bernie Sanders, Pete Buttigieg and Elizabeth and Warren, and a Quinnipiac poll this week also shows her nationwide in the middle of the pack.

Klobuchar also brought up that the Trump administration’s tax changes need to be rolled back.

“We have a President, who, after he signed that tax bill that put all this money to the top 1%, he came down to Mar-A-Lago, and remember what he said? He said, ‘I just made you a lot richer,’ he said to his friends,” Klobuchar said.

“One of the major issues was gun safety and one of the major changes was the fact that the House voted for universal background checks and closing the Charleston loophole,” she said.

Klobuchar also said her plan for an improving economy for all includes making education, healthcare and retirement a reality for workers who may not be in a union or work part-time, going from one job to another. Those workers now make up a third of the workforce.

“They don’t have the access, many of them, to any big retirement plan, whether it be a pension or even a 401K, and they don’t have access to the kind of child care and other things we would get working at one big employer,” Klobuchar said.

The health care workers at the discussion told the Senator that health care and providing it to those who need it saves dollars and lives.

She told them when it comes to the labor issues concerning the next Democratic Debate in Los Angeles, she said she would skip the debate and won’t cross the picket line if it comes to it.