Hundreds of concerned protesters gathered in Homestead Saturday afternoon for the “March To Keep Families Together.”

Civil rights and immigration groups including Friends of Miami-Dade Detainees, the ACLU of Florida, and United We Dream asked demonstrators to make the right call.

“I want people to call their legislators and express rightful indignation at this policy of indefinitely detaining families and separating children from their parents,” said Thomas Kennedy with the Florida Immigrant Coalition.

Hundreds marched 1.5 miles to the children’s detention center in Homestead. Activists asked that the unaccompanied minors and young children inside be reunited with their family. 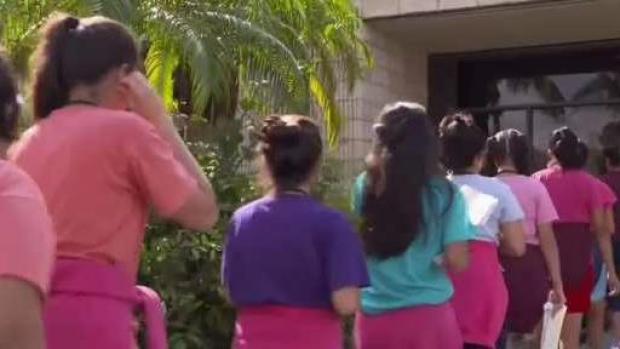 Cecilia Tavera-Wevman was one of the protestors and said, “We’re all immigrants of this country and I think somebody has to fight for these children who obviously are not being represented.”

Participants also called on the Trump administration to release plans on how they plan on reuniting the thousands of families separated at the border.

“There’s no records of where these children have been placed and where their parents are,” explained Dr. Zuba. “There’s no written documentation. How can this happen in 2018 in the United States of America?”

Lynn Hausmann was one of the many community members who said standing up for what they believe is the American way.

Hausmann described the event saying, “I’m amazed at all the people I see here. All different ages, colors, and languages coming together. I’m very proud to be an American.”

Lawmakers told NBC6 that the 70 children, who are identified with a number, have a daily itinerary, which includes waking up at 6:30 a.m. and getting three meals a day and snacks. But there are still many questions left on what’s next for those children and their families.