Dozens of South Florida flights were canceled Monday as a powerful nor’easter could bring blizzard conditions and more than a foot of snow from the mid-Atlantic to parts of the Northeast.

People were showing up to Miami International and Fort Lauderdale-Hollywood International airports with their fingers crossed that their flights north wouldn’t be impacted by the storm that was poised to slam the Northeast on Tuesday.

Some 27 flights were canceled to places like Boston, New York, Philadelphia and Baltimore from MIA, with 105 delayed.

Another 26 flights to those same cities were canceled from FLL, with 75 more delays. Flights to Canada were also affected.

South Florida Flights Canceled Ahead of Storm in Northeast 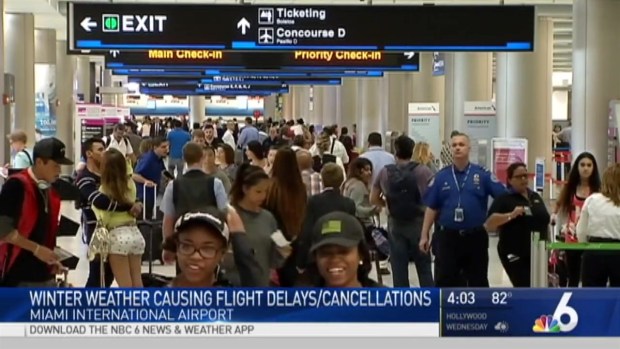 Things are only going to get stickier Tuesday morning when the storm hits with more than a foot of snow in the forecast in some places.

Meanwhile, Florida Power and Light was sending 320 crews north to help with any outages from the storm.