Authorities say three suspects arrested in the murder of an off-duty Coral Springs firefighter were fleeing the scene of an attempted murder in Palm Beach County on the night of the killing.

The gunman, Holston, and the two accomplices are facing charges of first-degree murder, armed robbery and conspiracy, BSO officials said.

The body of Randazzo, a member of the Coral Springs-Parkland Fire Department, was found early Saturday at the Southern Seas on the Ocean Hotel in Lauderdale-by-the-Sea after deputies responded to a medical call around 6 a.m., BSO officials said. 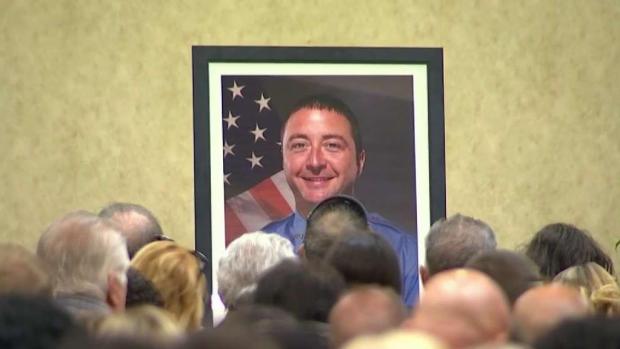 Randazzo had been seen leaving the nearby Aruba Beach Cafe around 1 a.m. Saturday, officials said. Randazzo had worked at the cafe for more than 18 years before he became a firefighter.

Officials said the suspects had been involved in a separate shooting in Lantana on the night of Randazzo’s killing.

Lantana Police arrested Holston on Thursday and Romero and Rico on Friday, officials said. Two other “involved parties” are not facing charges as of now, officials said.

“Evidence from both scenes as well as statements obtained tie the suspects to both incidents. Due to the simultaneous investigations, and to preserve the integrity of each, details and names of the individuals could not be released until now,” BSO officials said in a statement Friday.

Friends, family members and co-workers honored Randazzo with a procession Tuesday, a viewing Wednesday night and a funeral on Thursday.

Broward Sheriff Gregory Tony attended the funeral, where he announced that arrests had been made in the case.

“We have committed every single resource to bring the justice that is necessary to bring closure to this,” Tony told mourners in his brief remarks. “We are not done until every single person is in our custody and served their day of justice.”

Randazzo attended the Coral Springs Regional Institute of Public Safety in 2018 where he earned his firefighter certification, and earned his paramedic license the same year. He was hired by the Coral Springs-Parkland Fire Department in March of 2019.