There’s a new tree in the front yard which blooms with yellow flowers, his favorite color. An “MSD Strong” flag flies from the roof. Artwork, including two donated portraits, hangs on the walls. Tributes to Chris Hixon are everywhere in the house he shared with his wife for 28 years.

The athletic director at Marjory Stoneman Douglas High School, Hixon ran, unarmed, into the 1200 building during the rampage and never came out.

“That’s probably the hardest part for me, you try to figure out why, and there will never be a why, it’ll never make sense,” Debbi said. 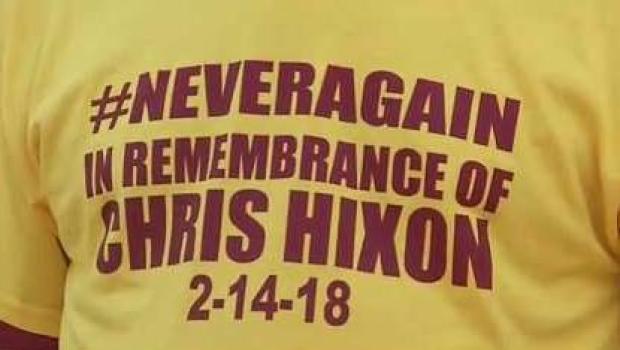 The killing that day was all random, the devastation it caused is all personal.

“And we were supposed to be where we could just enjoy each other and being a married couple and we’ll just never get to experience that, and that’s hard,” Debbi said through sobs, as Corey hugged her and cried as well. “But you know I have Corey, and Corey is so awesome but it’s a lot of work, there’s a lot of decisions that go into taking care of him and Chris and I always made those decisions together and you second guess yourself and you wonder, am I doing the right thing and Chris was always the person that brought me down off the ledge.”

Now Debbi relies on professional counseling, talking to her son Tom on Skype, and sharing her feeling with the other families who lost loved ones in the massacre. They’re the only people who truly understand.

“The anger and just the pure unbelievableness of what happened, that day is really hard to explain to somebody,” Debbi said.

To honor his memory, the family started the Chris Hixon Athletic Scholarship. It benefits one student-athlete per year from Stoneman Douglas, South Broward, and Blanche Ely, the three high schools at which Hixon served as athletic director during his career. A 5K run to raise money for the scholarship fund will be held on February 16th in Hollywood. (Register at www.runsignup.com/race/fl/hollywood/ChrisHixonMemorialRun)

“We’re trying to do positive things to remember Chris because to us, he was a hero every single day, he was that person who stepped up regardless and never wanted the accolades or someone to toot his horn,” Debbi said.

So channeling grief into a worthy cause helps, but one year, five years, even a lifetime won’t be enough time to recover emotionally.

“You know there’s gonna be a hole in our life forever and that will never heal, so I don’t know if you actually ever heal from something like that,” Debbi said.