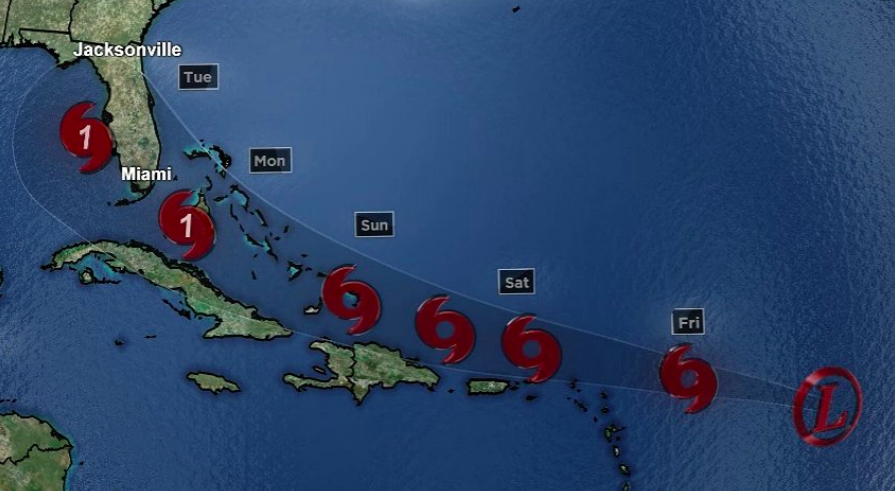 South Florida remains in the cone of concern for the latest tropical depression that could become a named tropical storm as early as Thursday.

The 11 a.m. advisory from the National Hurricane Center has the depression at 35 miles per hour while 750 miles east-southeast of the northern Leeward Islands traveling to the west-northwest at 21 m.p.h.

A tropical storm watch is in effect for Saba and St. Eustatius, St. Marteen, Antigua, Barbuda, St. Kitts, Nevis and Anguilla. No watches have been placed on South Florida or anywhere in the southeastern United States at this time.

Forecasters expect the storm to increase to tropical storm
strength at some point Thursday while advising residents in the Leeward
Islands, Virgin Islands and Puerto Rico for effects from the system as early as
Friday.

Rainfall is expected anywhere between one and six inches for areas in the Caribbean.

The latest track takes it just north of Puerto Rico, the Dominican Republic and Haiti by Saturday and Cuba on Sunday while going over the Florida Keys and up the west coast of the state at some point Monday into Tuesday – but the system’s exact path or impacts, if any, to our area are highly uncertain.

The good news is that the probability of tropical storm force winds is only at 12% for Saba in the northern Leeward Islands and only 9% for San Juan, Puerto Rico.

The current probability of tropical storm force winds stands at 40% for Grand Turk, 35% for Andros, 28% for Key West and 19% for Miami.

Meanwhile, another tropical wave became Tropical Depression 14 on Thursday with winds of 35 m.p.h. moving west at 21 m.p.h. Tropical storm watches are currently in place along the coasts of Honduras and Nicaragua with up to four inches of rain expected to fall.

The NHC says the center of the system will move just north of Honduras on Friday and will approach the east coast of the Yucatan Peninsula of Mexico on Saturday. It’s then expected to cross into the south-central Gulf of Mexico on Sunday. The depression is expected to become a tropical storm later Thursday and could be near or at hurricane strength when it reaches Mexico.

Another wave over western Africa has a 10% chance of cyclone formation in the next two days.