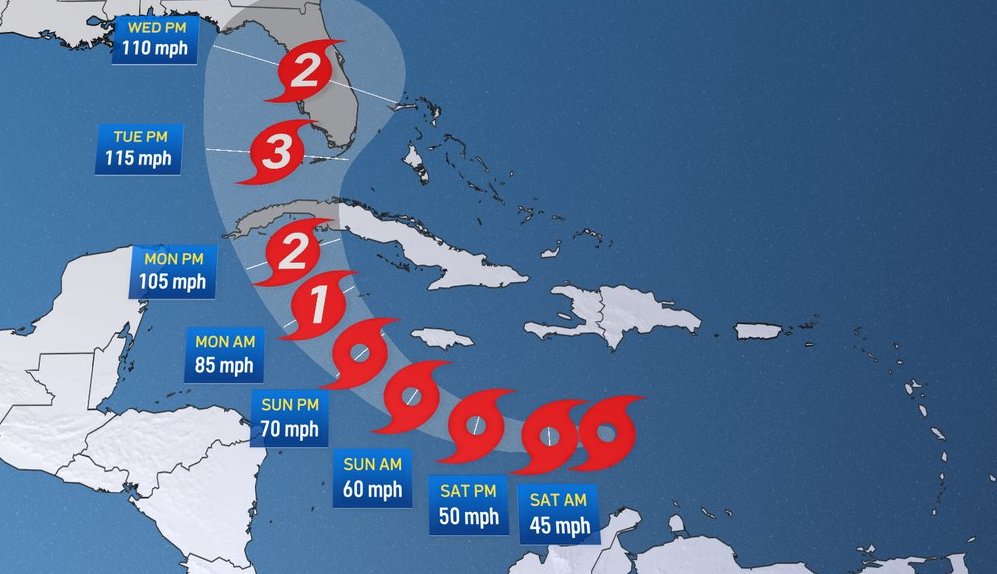 Tropical Depression Nine has strengthened to Tropical Storm Ian Friday night and was forecast to strengthen into a hurricane as South Florida was in the “cone of concern” and on guard for possible impacts in the coming days.

Ian had maximum sustained winds of 40 mph and was moving west-northwest at 12 mph about 385 miles southeast of Kingston, Jamaica, the National Hurricane Center in Miami said Friday.

A hurricane watch was issued for the Cayman Islands Friday evening, while a tropical storm watch was in effect for Jamaica.

Strengthening is forecast during the next few days, and Ian is expected to become a hurricane Sunday night, the NHC said.

The latest forecasts from the NHC showed the system possibly becoming a major Category 3 hurricane.

Ian’s center is forecast to move across the central Caribbean Sea through Saturday, pass southwest of Jamaica on Sunday, and pass near or over the Cayman Islands Sunday night and early Monday. Ian will then approach western Cuba on Monday.

Local leaders are urging residents to prepare, not panic, for a storm that will potentially impact Florida. NBC 6’s Ryan Nelson reports

Florida Gov. Ron DeSantis declared a state of emergency Friday for 24 counties in the potential path of the system, including Miami-Dade, Broward, Monroe and Palm Beach.

“No cause for panic but we want everyone to be prepared,” Levine Cava said at a briefing. “Now is the time to make sure that you have a hurricane plan in place.”