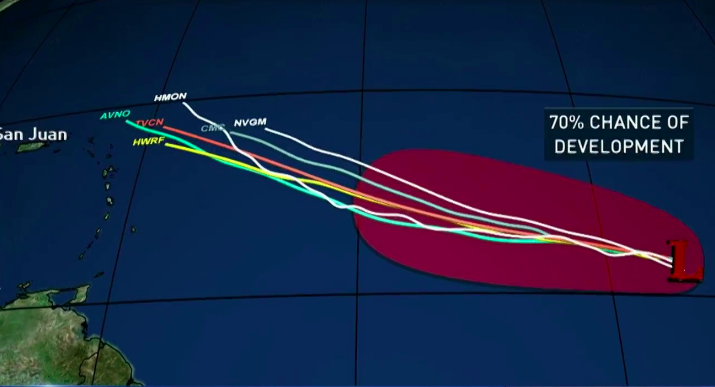 South Florida is watching a tropical wave that right now is thousands of miles away, but could become the next depression and possibly a named storm of the 2020 hurricane season.

The large area of low pressure is roughly 800 miles west-southwest of the Cabo Verde Islands and over 1000 miles east of the Leeward Islands. The system is a little better organized and we could be looking at a tropical depression by later Tuesday or Wednesday.

The disturbance is moving west-northwest at 15 miles per hour, which brings it near the Leeward Islands later this week. If you take the GFS (American) and ECMWF (European) models at face value, rain and wind will be a non issue for the Caribbean. In fact, the European model keeps the region mostly dry throughout the weekend.

Even if the system were to take a track farther to the south, we aren’t looking for major impacts. Invest 95-L is forecast to face harsher conditions later this week and this will likely keep the system from strengthening considerably.

The system is forecast to face harsher conditions later this week too. This will likely keep the system from strengthening considerably. Needless to say, we will continue to watch closely.