Millions of people across South Florida are braced for Hurricane Irma’s imminent arrival, after the storm left death and destruction on islands across the Caribbean.

One major question that remains is when the hurricane, now scraping the northern coast of Cuba 160 miles southeast of Key West, is going to arrive in Florida, and where. The massive storm will bring several dangers: winds, rain and storm surge.

While forecasts on Friday predicted that Irma would drive up the Atlantic coast of Florida or shoot up the middle of the state, current forecasts have it hugging the Gulf coast instead, with Tampa directly in its sights.

But there will still be great danger on the east coast, which will have its worst storm surge Sunday at around noon.

Landfall in the Florida Keys is expected Sunday morning, with Irma’s maximum wind gusts expected as fast as 167 mph in Key West at 7 a.m. Sunday. The islands are already experiencing tropical storm-force winds as of early Saturday afternoon.

The storm, now a Category 3, could re-strengthen into a Category 4 as it crosses the Straits of Florida.

Here are the current forecasts for Hurricane Irma’s arrival times:

What South Florida Can Expect When Irma Arrives 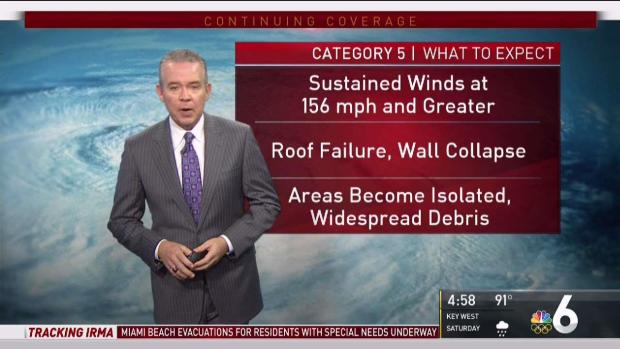 Southwest Florida: Sunday afternoon, with the worst impacts in Naples and Fort Myers